ACA: Using AutoLISP to Change the Swing of all Swinging Doors

There was a request to change the "swing angle" of all of the Doors in a file to 30 degrees. Building on code I previously wrote for changing the heights of Doors a given style, I put together a command function in AutoLISP that does that. One thing to know before embarking on this particular task is that while all of the 20 built-in Door Types appear to have a SwingAngle property (I did not check all 20, so do not hold me to that), only five of those types (Single, Double, Double Opposing, Uneven and Uneven Opposing) will accept a change to that property; the other 15 types will throw an error and crash the routine. There are four additional types (Single-Dhung, Double-Dhung, Uneven-Dhung and Communicating) that are in fact swinging Doors, but for some reason were not included when the SwingAngle property was introduced. (See comments at the end of the article for more on that.) The "swing" of these types can be changed using the OpenPercent property; a value of 16 approximates 30 degrees. No change is made to the other 11 types of Doors.

The following code defines a command called DRSW that will change the "swing" of Doors of one of the nine types previously mentioned to 30 degrees/16 percent. That amount is hard-coded, on the assumption that this would be part of a larger automation task meant to run unattended (or that you always wanted the same degree/percent values). Collecting user input would be easy enough to add at the beginning if you want to specify the angle/percent each time you run the program.
Originally, all Door Types controlled how open they appeared using the Opening percent property on the Properties palette (or its prior equivalent). 100% open for a swinging door meant a 180-degree swing. So a 90-degree swing would be 50%. Some users complained that may make sense to a programmer, but they thought of door swings in terms of degrees, not percentages. So at some point (I do not recall which release), a SwingAngle property was added to Door objects, and, for the five Door types noted above, Swing angle replaced Opening percent on the Properties palette. For those five Door types, the two values are linked - change one and the other changes, too. (That is how I determined that 16% was the right value for 30 degrees - that is the value for OpenPercent that the program shows when the SwingAngle is set to 30.) I have no idea why the three Dhung and the Communicating Door Types were omitted from the change to SwingAngle. Perhaps the original complainants rarely, if ever, used those types and so they were not in the original request. Or maybe the way things were set up in the program, it was easy to make the change for the five types that were changed, but not for the other four. Whatever the reason, things are the way they are, and the code above accommodates that.
Posted by David Koch at 3/22/2021 07:02:00 PM No comments:

AutoCAD: No Fill on Polylines With Width

The results of some quick research suggested that Label Curves do not have a leader option, when offset from the Plumbing Line that they are labeling. I am not sure if there is some inherent limitation here, or it just was never part of the specification for the object. They certainly have many useful features, like masking the Pluming Line, if desired, and repeating at a specified distance or a specified number of times - but no leader.

It occurred to me that, for the stated case of a short Plumbing Line, that the masking and repeating features were not necessary, and that a Schedule Tag, which can have an integral leader, could be created that looks just like the Label Curve, if the data displayed by the Label Curve was available in Property Data. It turns out that, at least for the Standard - Pipe With System Label Label Style, which shows the Object Props. and Abbr. System Name, Plumbing Lines have corresponding Automatic Property sources: Nominal Size and Abbreviation. I was able to create a Property Set Definition that applies to Plumbing Lines and includes three properties: 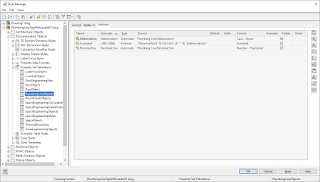 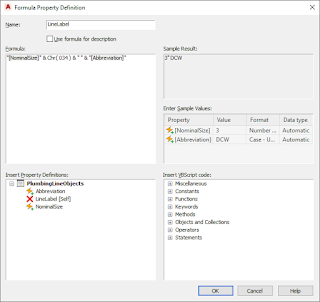 Revit: Tip When Making the Transition from Network to Named User Licenses

Here is something of which I wish I was aware prior to the change over from network to named-user licenses. If all of your users were already set up with BIM 360 Design licenses (which were always named-user) and were always signed into Revit with their Autodesk Account, then this will not be an issue for you. But if you have users that are not signed into Autodesk Account when using Revit under a network license, chances are that their default Revit user names are not the same as the Username on their Autodesk Accounts. Make certain everyone synchronizes and relinquishes all object ownership in all Revit models while still using a network license BEFORE you change them to named user.

Once on named user, your users have to be signed in, and their Revit user names will be "locked" as the Usernames associated with their Autodesk Account. If that differs from their previous user names, they will not be able to synchronize their old local files, nor will they be able to create a new local under their old user names so that they can relinquish ownership of objects.

You might think no one would ever close Revit having only saved changes locally, or without relinquishing all ownership, but you would be wrong. I have already run into this twice.
Posted by David Koch at 1/28/2021 05:47:00 PM No comments:

Not sure I really need to record this knowledge for the future, since we will soon be out of the Autodesk network license business completely. All but 30 of our network licenses made the jump to named-user licenses last Thursday. Perhaps I will post something about that experience, once the dust settles and my anger subsides. Returning to the subject of this post, I needed, for the first time, to set up an options file to limit access to those remaining 30 licenses for those running Revit 2016, since the 2016 (and older) releases of Autodesk software have to be uninstalled and reinstalled to change the license type. In my opinion, that is too much work for something that will no longer be "of right" licensed in two or three months. But we do have a few active projects in Revit 2016 that the project teams do not want to upgrade (or do not want to upgrade at this point in time, due to imminent deadlines). The problem is we were not able to convert everyone over to named user licenses for 2017 and later versions before the end of the grace period, and the unconverted users were taking all of the licenses.

What I discovered this evening/this morning is that when specifying the user names for the group I was creating in the options file, you do NOT include the "@" and the computer name as part of the user name. I had always seen users being reported with their Windows login name followed by "@" and then the name of the computer on which they were running the software that was asking for the license, so I foolishly assumed that was how the user name should be specified. But when I reread the license with the new options file in place, I was not able to get a license myself, and someone who had a license checked out who was on the list was also denied. I panicked, and put back the old options file. I looked at the instructions again, and noticed that the examples only had a user name, without any machine designation. I then added my user name, without a machine name in addition to my user name with a machine name, reread the license, and I was able to get a license. Then I removed my user name with the machine name, and it still worked. Adding the other user with out the machine name allowed that license to also be checked out, convincing me that was the correct approach. So now all users that I want to include have the"@" and machine name removed, and I am fairly confident that will work. I guess I will see Monday morning.
Posted by David Koch at 1/24/2021 12:38:00 AM No comments: