For those not using Project Navigator and the Callouts that are linked to a Model Space View, there are two ways to display the scale of a viewport that will update "semi-automatically". Users of Autodesk Architectural Desktop 2004 or later can use Formula properties to obtain and format the viewport scale. Users of Autodesk Architectural Desktop 2005 and later can use a field in Text, Mtext or an Attribute attached to a Block Reference. Each method has its advantages and disadvantages; use the method that works best for you and your workflow.

A sample file created in ADT 2006 that contains examples of both techniques has been posted to this thread in the Autodesk Architectural Desktop Dicussion Group. The content in that file is not meant to be finished content suitable for project use, but was developed solely to demonstrate that the ideas work. Testing of the content was fairly limited; should you choose to adapt any of it for your own use, please test it thoroughly to be certain it performs as you expect.

Fields
Setting up a field is certainly easier than setting up the formulas and tags. I used Dtext to hold the field, but you could add it to an attributed block just as easily. After adding the field or attributed block with the field, you will need to edit the field. Choosing the Object Field Name, use the Select Object button to select the desired viewport, select the Custom Scale Property and choose your desired Format. The 2006 version of the dialog can be seen in the image below. 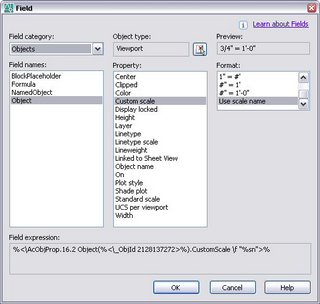 I noted the following with respect to using fields:

Formulas
You can retrieve the CustomScale property for a viewport object using a Formula property that is part of a Property Set Definition attached to the viewport. You can then format that value however you like, provided you are willing to write the code to do so. There is also a StandardScale property, which returns an integer that is likely related to the Scale List, but in the time I spent looking at this, I was not able to work out how to take that number and use it to get the associated scale name.

The following assumptions were made in developing the sample Formula properties. If your situation varies, you may need to adjust the formulas to suit.

The ViewportObjects Property Set Definition in the sample file contains the following properties:

I chose to use two separate properties, one to get the scale value, and another to do the formatting, to make it easier to test these two functions. You could just as easily use one formula and eliminate any issues that might arise when reading the ViewportScale value into the ViewportScaleString property, such as the reduction of the precision to a maximum of eight decimal places.

The Measurement formula reads in the value of the MEASUREMENT System Variable, using this formula:


The ViewportScale formula gets the viewport object using the Handle Automatic Property Source. Since viewports are in paper space, there will be no issue with the Handle source not working across externally referenced files; using Handle lets the same formula work in any version since the introduction of the Formula property in ADT 2004. Once the viewport object is in hand, getting the CustomScale object and taking its inverse is easily done.


The ViewportScaleString property uses the value from the ViewportScale property and performs the formatting need to create the string to be displayed. As shown in the code below, the first test is for whether the drawing is using Metric or Imperial, based on the value in the Measurment property [MEASUREMENT System Variable value].


Please note the following with regard to rounding: The ViewportScale property returns the inverse of the CustomScale property of the viewport, with up to eight-decimal places. The ViewportScaleString arbitrarily cuts off formatted Metric scales and Imperial scales using the 1" = feet and inches format to four decimal places without rounding. This should not be an issue if your viewport scale is a standard scale with a whole number scale factor; displaying some fractional value can help identify viewports that have been incorrectly set up or modified.

Updating of the Scales – Field and Formula
If you have read this far, you may have forgotten my use of the term "semi-automatic" way back in the first paragraph to describe the updating of the scale properties. Here is what I observed in my sample file, during the limited testing that I did. The values do not always update instantaneously; I did not test what would happen when plotting the file with a value that had not been updated. If you have all of the "Automatically update field values" options selected [User Preferences tab of the Options dialog] - including Plot - I would not expect to have a problem with fields, but you would certainly want to test this before using it in a production environment.

One other note of caution: Do not use this with multiple versions of Architectural Desktop running - not simply installed, but with separate instances of multiple versions actually running - on the same computer simultaneously. I experienced "lock ups", where not only the Schedule Tag, but the Property Data as displayed on the Properties palette, remained fixed on the initial value, even after saving, closing and reopening the file. Closing all but one instance of one version of Architectural Desktop and reopening the file restored the ability of the properties to update.

Structural Member Styles can have up to ten components. The Shape Designation - List Automatic Property Source returns a "list" of the starting shapes used by the components of a Structural Member Style. The name of each shape appears in order, separated by a semicolon from the other shapes. For example, a steel column shape with three components, a 12x12 base plate, a W8x28 column and a 12x12 top plate, would be listed as "12x12;W8x28;12x12", assuming that "12x12" and "W12x28" were the shape names for the plate and column components.

If you wanted to create a tag that listed a particular shape name, or had some other need to have access to the individual shape names, you can use a series of Formula properties, one for each component/shape name. A sample file with one approach to doing this has been posted in response to a question raised in my AUGI Training Program course on Formula Properties [ATP121]. To assure access to the file after the course concludes, I have also posted the file to this thread in the Autodesk Architectural Desktop Content Discussion Group.

In the formulas, the first thing I did was to append a semicolon onto the end of the string returned by the Shape Designation - List Automatic Property Source. This creates a string in which every shape name is followed by a semicolon and allows every shape name to be processed in the same way.


The formulas for shape names two through ten are identical, except for the value set assigned to the shapeNumber variable, which determines which shape name gets returned [2 = second shape name, 3 = third shape name, etc]. A Do While Loop statement is used to execute the code that removes the leading shape name and its trailing semicolon until the desired shape name is at the head of the string. Then the resultant string is processed using the same code as used in the formula for the first shape name. There is one extra wrinkle here, to accommodate Stuctural Member Styles that use less than ten components - after each truncation, the resultant string is tested to see if it is an empty string. If so, the Do While Loop is immediately exited. An empty string is returned if there is no component assigned to that number, otherwise the shape name is returned. Here is the formula for the second through tenth structural shape names, shown for the tenth name: 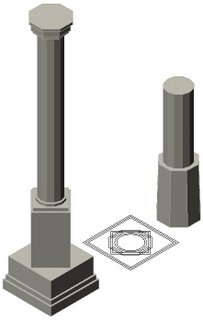 The style name property values for the ten-component style looks like this: 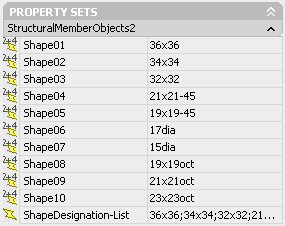 The style name property values for the two-component style looks like this: 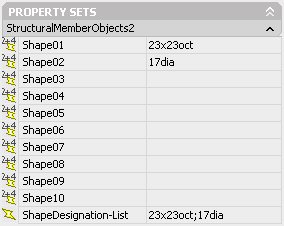 In response to a question in the Autodesk Architectual Desktop Content Discussion Group, I have posted a ZIP file containing a sample file and an AEC Content Schedule Tag file done in ADT 2005 showing that you can, if you like, use polylines to represent the outline of a room and set up a Property Set Definition and Schedule Tag that will display a room name, room number and room area. 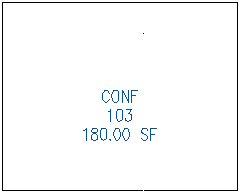 For those of you who are considering taking ATP121 but like to wait to the last possible moment to commit to something, that moment is here! The course starts Monday, June 12 - a mere three days from now. So go sign up for it, already, and I will "see" you in the course forum. 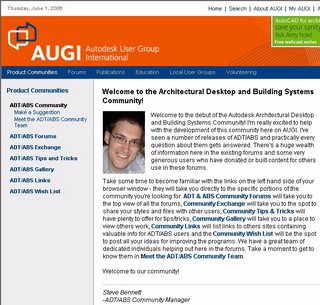 Today marks the launch of a new "community" at the AUGI Website. Joining the existing communities for AutoCAD and Revit is one for users of Autodesk Architectural Desktop and Autodesk Building Systems. The new community provides easy access to the ADT/ABS Forums - including the addition of three new Forums under the ADT/ABS General category: ADT/ABS Community Gallery, The Watering Hole and The WhiteBoard.

Check it out by logging in to AUGI, selecting the Product Communities link (on the left, just below the orange AUGI banner), then choosing the Architectural Desktop & Building Systems link in the left sash.