View Tab
The View tab is the fifth static (always available) tab provided in the out-of-the-box ACA CUI. The image below and all screen captures in this article are based on the shipping version. 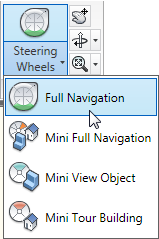 The drop-down list offers a choice between the Full Navigation Steering Wheel and three “mini” steering wheels; the main button initially defaults to Full Navigation, but will change to the most recently selected item from the list. The Pan Realtime command button executes the PAN command. The Orbit split button allows you to initiate one of three orbit types. 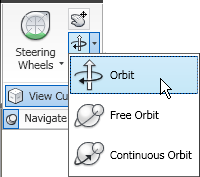 The drop-down includes the Orbit (3DORBIT), Free Orbit (3DFORBIT) and Continuous Orbit (3DCORBIT) commands. The last one chosen becomes the one activated by the main command button. The Zoom split button allows you to perform various ZOOM command options.

These are the same options available from the Zoom split button on the View panel (floating/Home tab), with the exception of omitting the Pan Realtime button, which is available separately on the Navigate panel. Click on the Navigate panel title bar to expand the panel and reveal the View Cube command button. This will only be active when your visual style is set to something other than 2D Wireframe; when active, it toggles the display of the View Cube on and off in all locations (main drawing window as well as other windows, such as the Object Viewer). 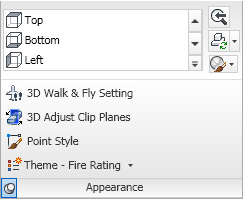 The View drop-down button displays a list of defined Views in the current drawing and allows you to restore one by selecting it. 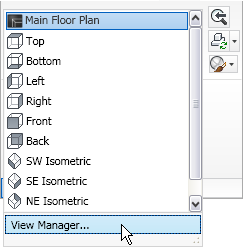 Use the up and down arrows at the right to scroll the list or use the drop-down button at the bottom right to see the defined Views in a drop-down list and expose the View Manager button, which opens the View Manager dialog (VIEW command). The Previous View command button runs the Previous option of the VIEW command. The Regenerate split button offers a choice of three regeneration-related commands: Regenerate Drawing (REGEN command), Regenerate Drawing and Viewports (REGENALL command) and AutoCAD-Architecture-specific Regenerate Model (OBJRELUPDATE command). The main button always runs the Regenerate Drawing (REGEN) command. The Visual Styles drop-down button allows you to choose one of the currently defined visual styles in the drawing from an icon list (choice runs VSCURRENT command), save the current visual display as a named style (VSSAVE command) – provided that 2D Wireframe is not the current setting or open the Visual Styles Manager palette (VISUALSTYLES command). 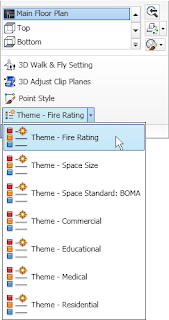 Each of the buttons on the drop-down runs a ribbon tool.

The Set Viewports drop-down button, only active when the Model tab is active, allows you to choose from a list of pre-defined tiled viewport configurations (VPORTS command). 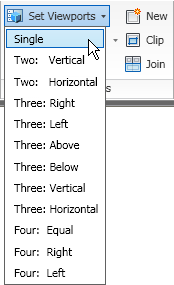 The Create Viewport split button, only active when a Layout tab is active, has two command buttons on the drop-down list: Create Polygonal, allowing you to draw a polygonal viewport by selecting vertex points (-VPORTS command, Polygonal option) and Create from Object, which allows you to select a closed polyline or a circle and create a viewport in that shape (-VPORTS command, Object option).

The last button selected on the drop-down list becomes the command executed by the main button. The Named command button opens the Viewports dialog to the Named tab, where saved viewport configurations can be selected (VPORTS). The New command button opens the Viewports dialog to the New Viewports tab and allows you to create a new named viewport configuration, or edit existing ones (VPORTS). The Clip command button, which can only be used in a Layout tab (TileMode 0), runs the VPCLIP command, which allows you to clip an existing floating viewport, either using an existing closed object (polyline or circle) as the clipping boundary or allowing you to draw a polygonal boundary on the fly. The Join command button, only active when the Model tab is current, allows you to join two adjacent tiled viewports, provided that the end result is a rectangle (-VPORTS command, Join option).

The VSFaceStyle split button allows you to choose type of shading used on the faces, no shading, realistic or gooch. 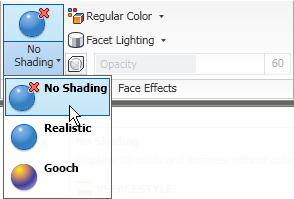 The Color split button allows you to set a new value for VSColorMode: 0 (regular), 1 (monochrome), 2 (tint) or 3 (desaturate). 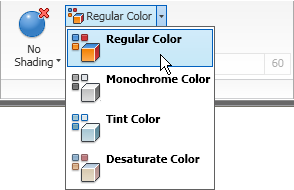 The Lighting split button allows you to set a value for VSLightingQuality: 0 (facet), 1 (smooth) or 2 (smoothest). 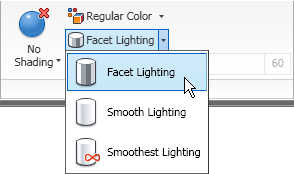 The main command button will change to the last option selected from the drop-down for all three of these split buttons. The X-Ray Effect command button toggles the sign of the value of VSFaceOpacity, turning the x-ray effect on and off. When it is on, the Opacity slider control allows you to change the level of transparency, from 0 to 100. On my computer, both 0 shows with full opacity, 1 is the most transparent and 100 is full opacity. For this to be effective, the current visual style needs to be a type that hides and face shading must be turned on. 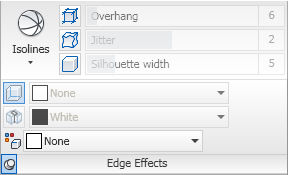 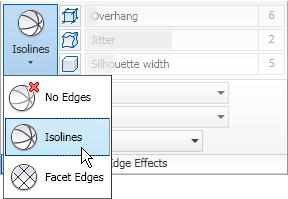 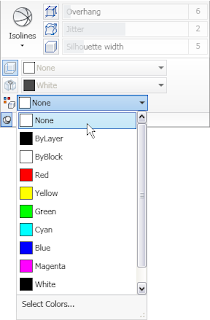 The Switch Windows drop-down button allows you to make any of the currently open drawings active, by selecting it from a list.