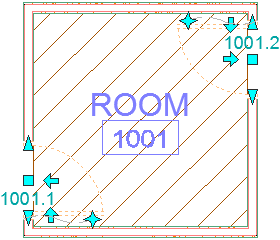 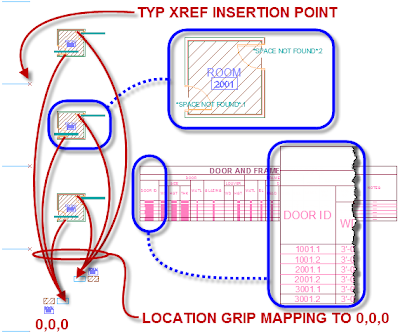 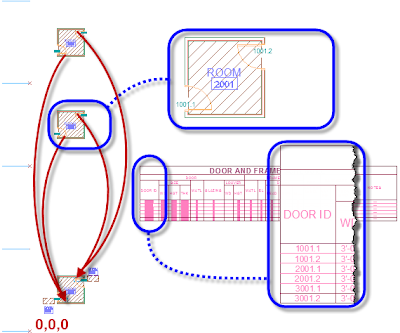 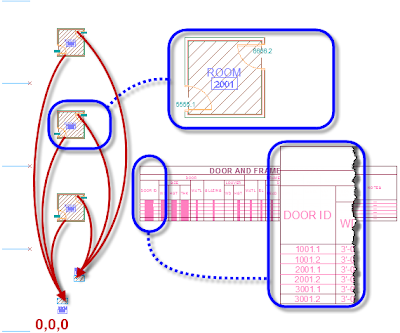 Opening the same files in 2013 or 2014 will give the same results, with the exception of the first sheet view image above, where instead of *SPACE NOT FOUND*, the desired room numbers will be displayed on all three floor plans, because there is no Space in the "mapped" location.
Posted by David Koch at 11/30/2013 11:17:00 PM 3 comments:

Paul Aubin has a helpful tip on the use of Guide Grids in Revit. Read the post and watch the detailed explanatory video in his blog post.
Posted by David Koch at 11/27/2013 04:43:00 PM No comments:

This is just a quick vent post on my increasing frustration with the Help that is currently available in AutoCAD® Architecture. I appreciate that moving the online Help "online" (internet-based) allows them to update the content, and that the vehicle for doing so would not necessarily be the same as it was back in the 2010 release, when the "online Help" files were locally installed. But it seems with each release, they take away another feature and make it that much harder to actually use the Help.

My personal peeve is the removal of the Contents tab. The old search function may not have always gotten me to the page I wanted, but more often than not it got me close, and I could then pop over to the Contents tab and look in the general vicinity of the "close" page and usually find what I needed. In its current incarnation, the Help is all but totally dependent upon the Search feature, as the only other options are a few general links on the home page (thank goodness they put a link to the system variables back on that page) and the Favorites, where you can save a page once you finally find it. If the new search was all that and then some, perhaps I would not be so frustrated. Here is an example of why I am frustrated:

I was trying to get up to speed on object transparency, and I had become aware that when plotting, transparency is turned off, by default, for performance reasons. I could see the toggle to enable transparency in the plot dialog, but I wanted to know more about it, and whether there was a System Variable that could also control that setting. So I did a search for PLOT TRANSPARENCY filtered for User information, and the second hit was the Plot Dialog Box article in the Help, which I selected and scrolled down to the section on Plot Options, which had the description of the Plot Transparency toggle. 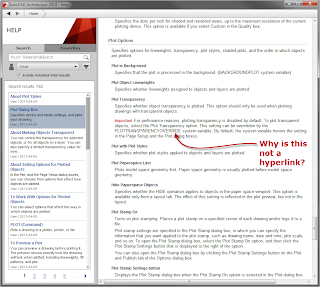 As I suspected, there was a System Variable, and I wanted to know more about it. Unfortunately, the PLOTTRANSPARENCYOVERRIDE text in the Help was not a hyperlink. "No problem," I thought, "my current search is for PLOT TRANSPARENCY, surely PLOTTRANSPARENCYOVERRIDE must be in the search results." So I scrolled down the first page of results and did not find it. I went to the second and third pages and came up empty there, too. (For the record, it was there, the twentieth item on page five. I typed two thirds of the title of that article as my search criteria. How could it possibly be the 120th result?)

After scrolling through the third page, I grew weary and decided to take advantage of the fact that I already knew the name of the System Variable. Perhaps the problem was that I had typed a space between "PLOT" and "TRANSPARENCY". I removed that space and redid the search, only to find that PLOTTRANSPARENCY generated no results. 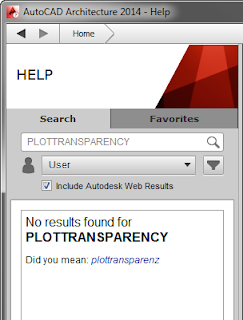 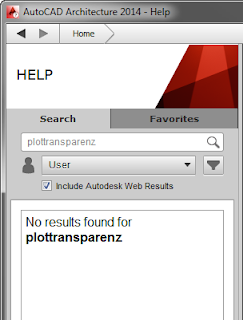 Finally, I did what I apparently should have done before even looking through the current search results, and changed the search string to PLOTTRANSPARENCYOVERRIDE. Searching on the entire name resulted in a much-reduced list of hits and put the one I wanted right at the top. All well and fine, since I already knew the name of the System Variable, but what about times when I half-remember part of the name? Why is the search limited to whole words? 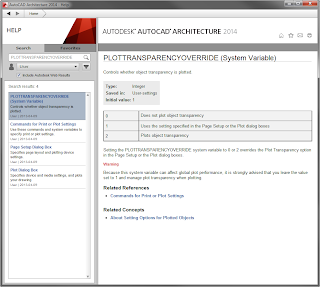 After the fact, I did discover one somewhat hidden gem in the current Help. If you select the tool with the funnel icon to the right of the user type drop down, you have the opportunity to filter the search results to just Commands, just System Variables or just Commands and System Variables. Had I done this on my original search terms of PLOT TRANSPARENCY, the article I wanted would have been the first search result and I would have been somewhat less frustrated. The filter does not resolve the issue where partial System Variable or Command names do not generate any results (unless that part exists as a free-standing "word" somewhere in the text). But it will save me from having to scroll through five pages of results to find something that should have been on page one from the start. 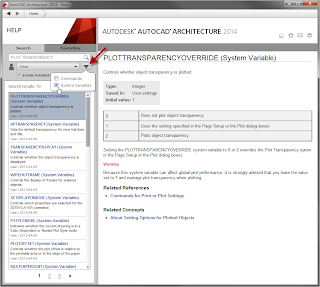 Note that unchecking the "Include Autodesk Web Results" toggle only removed four items from my original search, and the PLOTTRANSPARENCYOVERRIDE page was still on the fifth search results page, moving all the way up to number 118.
Posted by David Koch at 11/18/2013 06:48:00 PM 2 comments: