This issue came up today, and I wanted to document the solution for future reference. A user was working on a model, in Revit 2018, and was trying to create a new Sheet. On the View ribbon tab, on the Sheet Composition panel, the Sheet tool was inactive.

I was asked about this today, and decided to record the solution in a blog post, for future reference. Viewport Titles in Revit® will wrap onto a second line when the length exceeds what will fit, based on the length of the label in the Title Family, but often the user wants control over where the wrapping occurs. If your office protocols allow for using the Title on Sheet property of a Viewport for the title that is shown on the Sheet (rather than using the View Name), then you can set a line break at the cursor location in the Title on Sheet property edit box in the Project Browser by pressing CTRL+ENTER. 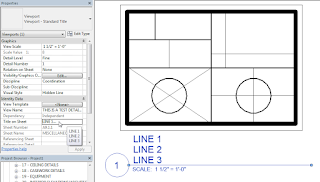 And, no, there is no significance to the contents of the Drafting View that I used as my test case, shown in the image above. They are just some semi-random Detail Lines drawn so that there would be something to see when the Drafting View was placed on a Sheet.
Posted by David Koch at 7/18/2018 05:35:00 PM No comments:

I had a request the other day to streamline the process of updating CAD Exports for an Autodesk Revit® project. Unfortunately, some team members are not working in Revit, so certain Views have to be exported to CAD on a regular basis for use as backgrounds for the non-Revit-using team members. After a bit of trial (and a little tribulation) along with an enormous amount of help from the generous souls who have posted sample code to the Community Forums at dynamobim.org, I came up with the following Dynamo graph. All of the nodes used are "out-of-the-box" nodes available in the 1.3.2 version of Dynamo, but there are two Python Script nodes, the code for which is based on example code posted in the Community Forums. (As always, click on a image to see a full-size version of the image.) 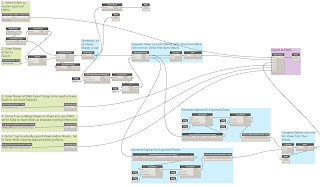 The end user has to do three things prior to using the graph: With that information in hand, the user can make a project-specific copy of the Dynamo file, enter those three items in the appropriate nodes, save the file, and then run it whenever updated exports are needed. Dynamo will overwrite any files of the same name in the target folder, so previous versions need to be archived elsewhere if a record of all exports is required. In the next few posts, I will go through the various sections of the graph, and, to the best of my ability, explain how each works, including the two Python Script nodes that do the heavy lifting. Before doing so, I would like to thank the following Community Forum contributors whose helpful responses to others' questions also helped me to complete this project. The nodes at the left side of the graph that are in green-colored groups are the nodes that require user input. I will conclude this first post with one of the simpler parts of the graph, the Folder for Exported DWGs - Directory Path node. 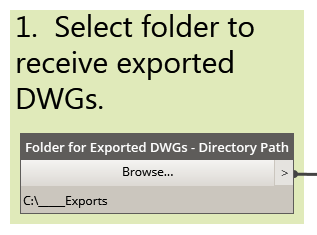 This is an instance of the out-of-the-box Directory Path node, with a modified node title. The Browse button allows the user to navigate to the folder where the exported drawings are to be placed. The output of this node is fed to the IN[0] input of the Python Script 2 node. One thing to note about this node, and the other user input nodes, is that if you right click on the node, you will see that the Is Input item on the context menu is checked. That means that this node will be available for user input in Dyanmo Player. 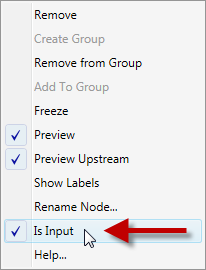 I am not certain how many clicks using this graph will save over manually doing the same export (probably a few on subsequent exports if Dynamo Player is used, without making any changes to the inputs), but it certainly will help make the process more consistent.