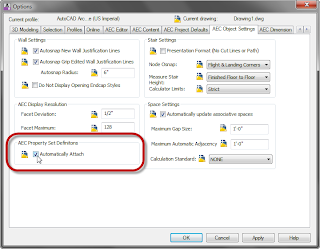 Here are some observations and comments based on working with this feature: Overall, I think I will be recommending that this feature remains turned off in most situations. Where it makes sense to activate it, it should be turned back off once its work has been done. It might work to turn it on in the "base" or model files (equivalent to Constructs) but it should be off in "sheet" files (or, in the Drawing Management environment, in Views and Sheets ), so that unwanted property data overrides are not introduced. I would rather have the project teams have to manually attach missing property sets in the proper place, the model file, than to have it appear to be attached in one sheet file, but have the data only exist in that one sheet file, as an override, than on the actual object, which could be externally referenced by other files.
Posted by David Koch at 3/26/2013 09:34:00 PM 1 comment: