So far in this series, we have seen nodes that allow the user to specify a folder to receive exported drawing files, a node for the user to enter the name of a ViewSheetSet which lists the Views/Sheets to be exported, the nodes that generate a list of Views/Sheets that are in that Set, nodes to separate that list into separate lists of just Views and just Sheets, and the nodes that generate file names to be used for the exported Views and Sheets. This post will examine the balance of the user input nodes. 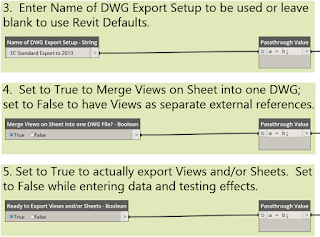 Each of these three input nodes includes a second "Passthrough Value" node, which are renamed Code Blocks and, as the node title suggests, simply pass through the value from the input node. They are not at all necessary, and are only there to make the group each is in wider, so that the rather long group titles will only take up two lines of text.

The Ready to Export Views and/or Sheets - Boolean node (Group 5) is a Boolean node. Setting this to False allows the user to enter data in the other nodes and Run the graph to view the results in the Watch nodes, verifying that all is correct before actually exporting any files. When all is ready to go, set this to True and run the graph one more time to export the Views/Sheets.

All three of these input nodes, like the other two, are set to be input nodes (see first post), so that they are available if this graph is run via Dynamo Player. The next and final post will examine the Python Script 2 node and the code inside it, that does the actual exporting.