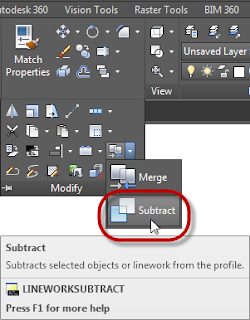 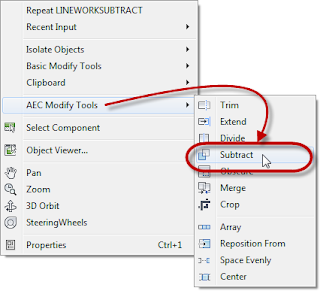 Several people in the Autodesk AutoCAD® Architecture General Discussion Group have experienced problems when trying to run AutoLISP routines in which an error condition is encountered. Instead of the usual, often helpful, error message at the Command: line, this error shows up, instead:
Cannot invoke (command) from *error* without prior call to (*push-error-using-command*).

This appears to happen even when the first thing you do in a drawing is evaluate a LISP expression with an error, for example, by typing (alert 1) at the Command: prompt and then pressing ENTER.

If you were hoping for a more informative error message, so you could try to work out what went wrong, you will want to reset the initial definition of the *error* function to what it should be:
One way to get this code loaded into every drawing you open would be to include it in your ACADDOC.lsp file (if you have one; if not, you can create one). This file needs to be somewhere in the AutoCAD Search path (and be the first on of that name found); if your firm has a standard ACADDOC.lsp file and you do not have rights to edit it, you may want to discuss having this code added to it with your CAD Manager. You will also want to have the folder in which the ACADDOC.lsp is placed be designated as a Trusted Path (Files tab of Options dialog) if you have SECURELOAD set to 1 to avoid the nag dialog about loading it. If SECURELOAD is set to 2, you have to have the ACADDOC.lsp file in a Trusted Path folder, or the file will not load at all.

There are other ways to get this code loaded with each file, if using ACADDOC.lsp does not work for your situation. The easiest would be to open Notepad and paste the code above into it, then save the file with a name of your choosing and a LSP extension, again, to a folder that has been designated as a Trusted Path. Then add that file to your Startup Suite in the Load/Unload Applications dialog (APPLOAD command).

I am not sure why the *error* function is not properly initialized, but running the above code when opening a drawing or creating a new drawing will resolve this issue and give you the expected error messages.
Posted by David Koch at 11/23/2014 08:29:00 PM No comments:

I decided not to wait six years between posts on the AEC Modify tools this time. Today's featured command is the AecLineworkDivide command. This command can be accessed on the Home ribbon tab, on the Modify panel flyout or from the right-click context menu (no command active), by choosing AEC Modify Tools > Divide. 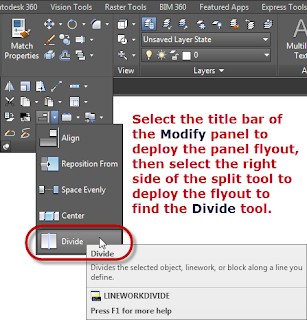 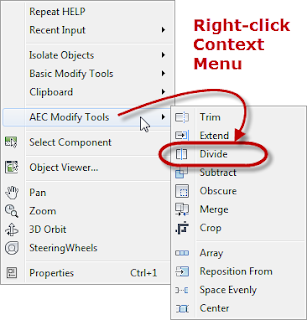 The Screencast embedded below shows the AecLineworkDivide command in action. As shown in the Screencast, the command works on linework, Mass Element Extrusions that have an embedded profile, AEC Polygons, Spaces and Block References that contain at least one of the previously mentioned objects. 11/23/2014 Update: "Linework" includes Hatches.

You can specify the dividing line in two ways (just as you could do so for the AecLineworkExtend and AecLineworkTrim commands), either by selecting two points, as was done in the Screencast, or, by pressing the ENTER key when prompted for the first point, and then hovering over an existing line in the file and left clicking when the desired dividing line is highlighted. No matter which method you choose, the dividing line is treated as being infinite in length; the endpoints need not be outside the extents of the selection set.

Here are some additional things of which to be aware when using the AecLineworkDivide command:

I am sure I have missed some object types or some combination of objects nested inside a Block Reference that have unexpected results when the AecLineworkDivide command is applied. I suggest using the Mark option of the UNDO command to set one or more UNDO Marks prior to using the AecLineworkDivide command in unfamiliar situations, so that you can easily UNDO Back to the Mark if things are not to your liking. That said, there are cases where this command can be handy, when used appropriately.