The second article helpfully lists a number of addins that should be left in place if you are using the Collaboration for Revit service. What it does not list is the addin that generates the Render in Cloud tool on the View ribbon tab, on the Presentation panel. It is rather hard to test whether removing the addins allows a cloud render to go through if the tool to initiate a cloud render is gone.

I was able to work out that the RaaSForRevit folder should not be removed from the W:\ProgramFiles\Autodesk\Revit 2018\AddIns folder if you want to have the Render in Cloud tool.
Posted by David Koch at 12/19/2018 12:17:00 PM No comments:

See this Autodesk Knowledge Network Article for details on the discontinuation of a 32-bit version of AutoCAD, starting with the next release.
Posted by David Koch at 12/18/2018 12:07:00 PM No comments: 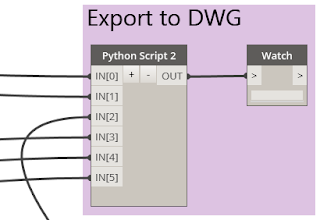 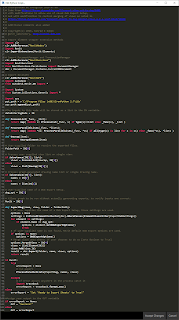 If you need to export the same Views and/or Sheets multiple times as a project makes its way through the design and documentation process, this graph can be a time saver while improving consistency. Customize a copy of it for each project, and use Dynamo Player to be a few clicks away from a new set of export files at any given moment.
Posted by David Koch at 12/09/2018 10:11:00 PM 2 comments:

For example, suppose you have a custom Space Tag that includes a an overall rectangle with a dividing line that separates the Space name from the Space number, as illustrated in the image below.

Further suppose that you often place these tags in areas where there is linework "below" the tag, and you would rather not have that show inside the outer rectangle, so that the name and number can be more easily read. You might decide to add a Wipeout to the view block to accomplish this task. So you place an instance of the view block, edit it in place (or in the Block Editor) and use the WIPEOUT command to add a Wipeout to the Block Definition, using the outer rectangle, which just happens to be a closed Polyline, to do so (without erasing the Polyline). So far, so good. Before saving the changes to the Block Definition, you select the Wipeout, right click and choose Basic Modify Tools > Display Order > Send to Back from the context menu, to execute the DRAWORDER command and send the Wipeout to the back of the draw order. After saving the changes back to the Block Definition (and closing the Block Editor, if you used it), you see that the instance of the view block is working as desired - the Wipeout is hiding linework under the view block instance, while showing all of the other linework in the block definition.

But when you examine your Space Tags, you find that while the tags now hide linework "below" them, the line between the room name and room number is no longer visible. If you select a Space Tag, that line is highlighted, so you know it was not accidentally erased or otherwise removed from the Block Definition, but it does not show. (Attributes seem to be treated differently from other linework, and do still appear on top.) What gives? Multi-View Block instances do not respect changes in draw order, and display the items within the view block definition in the order in which they were added to the Block Definition.

What to do? Do not use the DRAWORDER command to put things in the desired order - draw them in that order. You do not have to recreate the Block Definition for the view block from scratch. You can proceed as mentioned earlier, but after creating the Wipeout, instead of using DRAWORDER to push the Wipeout to the back, select all of the objects other than the Wipeout and use the COPY command, with a Displacement of 0,0, to create a new copy of each item in the same place. Then use the ERASE command, with the Previous command line option, to erase the objects you just copied. Now the Wipeout is the first item drawn in the Block Definition, and you can save the changes and have the desired draw order respected in both the view block and the Multi-View Block.