The NDA on discussing the features in the soon-to-be-released AutoCAD® Architecture 2011 has been lifted, and once again I find myself very busy (a good thing!). I will try to summarize the new features and improvements in this post, with the hope that I will find some time to put together some future posts with more detail (and screen captures) on some of the significant items.

User Interface
The good news (for some) is that there are no radical changes to the User Interface in 2011. There are some tweaks to the ribbons and the panels and tools thereon (to support added features, add user-requested editing tools to contextual ribbon tabs, etc.), but the basic setup remains as it was in 2010. Toolbars and pull-down menus have not been restored to the out-of-the-box CUIX files (other than the Express Tools pulldown, if you install the Express Tools).

One new interface item is the Navigation Bar, a floating “mini palette” (I hesitate to use the term toolbar) that provides quick access to navigation commands like the steering wheels, pan, zoom and orbit. You can turn this on or off; when on, you can choose to have it free-floating or tie its position to the view cube.

There is also a minor change to the options for displaying the ribbon. You can now minimize to “panel buttons”. This is similar to the previously available minimize to panel titles, but provides a graphic icon along with the panel title. A dropdown menu has been added to the “cycle” button located at the right of the ribbon tab names, which allows you to directly pick a ribbon display state, rather than having to cycle through to the one you want.

Wall Cleanup
The Wall cleanup improvements that have been introduced in the past two releases are now “completed” with the 2011 release. While editing Wall cleanup “in place,” you now have access to Fillet and Chamfer tools to aid in creating the cleanup condition you need. (These had been previously added to the Wall Endcap edit-in-place feature.)

When using the in-place-editing feature, the Add/Remove Vertex option now displays a dynamic preview of the result should you click at the current cursor location. If you edit a Wall cleanup from an isometric view, the cleanup height is now dynamically displayed.

I generally try to avoid non-zero cleanup radii whenever possible, but for those occasions where one must be set, if you do so by grip editing (with justification line display toggled on), a dynamic preview of the cleaned up condition (just component lines, no hatches) will display within the cleanup circle.

Constraints
A limited number of AutoCAD Architecture objects can now be used with the constraints feature that was added to AutoCAD in the 2010 release. You can apply constraints to Walls, Column Grids, Columns, Beams, Curtain Walls, Multi-View Blocks and Mass Elements. For example, a Wall can be constrained to a Grid line, so that it always remains a fixed distance from the Grid line, or two Walls, such as the opposite Walls of a corridor, can be constrained to remain a fixed distance apart.

Renovation
First included in a subscription extension for 2010, the Renovation feature is now integrated into the shipping product. The renovation feature is intended to make renovation projects done with AutoCAD Architecture easier for the user. While I have not had an opportunity to try this feature under real-world-project conditions, it does appear to be worth investigating. It makes use of the AutoCAD Architecture Display System, layers and object visibility, using rules and settings that you can customize, to allow the user to transform objects between new, existing-to-remain and existing-to-be-demolished. Once you have things set up, a click of a ribbon tool is all that is needed to toggle between a demolition plan display and a new work plan display. Any objects already drawing when renovation mode is activated become “existing” objects. If you demolish an existing Door, not only does the Door get transformed to "demolition", but the hole in the Wall will be filled with one or more Mass Elements (one per visible component) that will be visible as "new" infill when the new work drawing is displayed.

For those using the US National CAD Standard layering, it appears to work best if your “new work” layers do NOT have a status field (“-N”) specified, which would be something of a deal breaker for my office, as we do use the “-N” status field on our new work layers to make managing new work layers easier.

Enhanced Custom Grid
Also part of the 2010 subscription extension, the Enhanced Custom Grid allows you to create column grids where at least one column line does not run all the way across the entire building as a single object that can have column bubble tags added all at once and which supports primary and secondary levels of column line numbering (for example: 1, 1.3, 1.5, 2, 3, 4, 4.2, 4.7, 4.9, 5). This should reduce the need for converting linework and avoid the tedium of having to tag each column line of a linework-converted grid individually.

Custom Column
The Custom Column tool, from the 2010 subscription extension, provides a quick way to transform a closed shape (closed polyline, spline, ellipse, or circle) into a structural member shape, structural member style and an instance of that style in a few, easy steps. If you do not need the separate graphics for low, medium and high detail that using the MemberShape command affords, this is a great way to create a custom column shape that is not available through either the Structural Member Catalog or the Structural Member Wizard.

Placement of Openings in Walls
Yet another 2010 subscription extension item, the placement of openings in Walls (Doors, Door/Window Assemblies, Windows and Openings) has been enhanced. You can now place multiple, evenly spaced objects in one operation, and the boundaries of the spacing can now include grid lines, in addition to intersecting Walls. One consequence of this is that Center and Offset are now two separate placement modes, rather than one combined Center/Offset mode.

Miscellaneous
Structural Member Placement
When placing a Structural member that is not related to other, already existing objects, in previous releases you had to use the CTRL toggle to get to a state in which you can specify exact endpoints. In 2011, this process is greatly simplified by adding an “On object” property to the Design tab of the Properties palette, under the General category (only at the time of object placement).
Drawing Management and Windows Explorer
The Project Browser and Project Navigator dialogs can now interact with Windows Explorer. Files can be sent to the Recycle Bin (DELETE key) or permanently deleted (SHIFT+DELETE) from the Project Navigator palette. Windows Explorer can be opened directly to a project folder, category folder or single drawing by right-clicking and choosing “Show in Windows Explorer from the context menu.
IFC
A number of IFC Enhancements have been made. I have not had to use IFC to date, so I will leave the explanation of what has been added to others who have.
Web-based Help
The Help is now Web-based. If you have a live Internet connection, you will access the Help via the Autodesk website, giving you access to more frequent updates and improved search ability. This is also claimed to be the first step in providing AutoCAD Architecture help that is better integrated with the AutoCAD help. A toggle on the System tab of the Options dialog allows you to disable the over-the-Internet help, in which case a local version is used. The local version is still viewed and searched through a web browser window, however.

AutoCAD Improvements
Selection Cycling
When you click on overlapping objects, you now get a selection dialog listing all of the objects beneath the pick point, from which you can choose the one you want (or none). As you pass your cursor over the list of objects in the dialog, the object associated with the item under your cursor highlights to aid in determining which object you want. I found this quite handy.
”Borrowed” from AutoCAD Architecture
A number of “new” AutoCAD features will be familiar to AutoCAD Architecture users: Isolate Objects, Select Similar and Add Selected have made their way into the main AutoCAD product.
Polyline Grip Editing
New midpoint grips have been added, and all grips offer right click editing options, similar to what AutoCAD Architecture users have had when editing various AEC objects.
Transparency
Transparency has been added as a property that can be applied to layers and objects in the same way that color, linetype, lineweight and plot style have previously been applied. A toggle button has been added to the application status bar to toggle transparency on and off. While that toggle does not affect plotting, the Plot and Page Setup dialogs now have a checkbox for enabling/disabling transparency when plotting. Note that for AEC objects, transparency has not been added to the display settings of components, the General Properties tab of the Object Display dialog or on the Design or Display tabs of the Properties palette. You can, however, assign transparency to an AEC object’s layer. New AutoCAD features often take an extra release to work their way to AEC objects, so perhaps this will show up in 2012 or 2013.
Hatching
Hatch Creation and Hatch Editor contextual ribbon tabs avoid the need for a dialog box to display when using the Hatch tool or editing an existing hatch. When using the pick points method, as you move your cursor, a preview of the hatch that would be created if you clicked at the current cursor location is displayed.

There are many other AutoCAD changes that will, no doubt, be covered in greater detail by others; those are just a few that caught my eye.
Posted by David Koch at 3/25/2010 03:01:00 AM 8 comments:

Manage Tab
The Manage tab is the sixth static (always available) tab provided in the out-of-the-box ACA CUI. The image below and all screen captures in this article are based on the shipping version.

Click on the Action Recorder title bar to expand the panel and reveal the action tree. The contents of the macro chosen on the drop-down list will be displayed in the Action Tree. 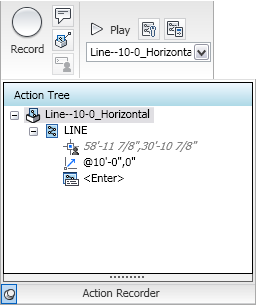 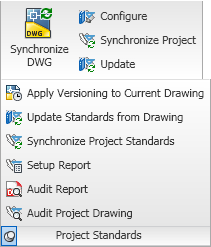 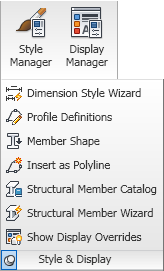 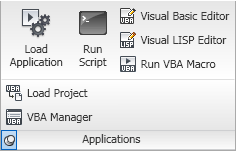 The Load Application command button runs the APPLOAD command, allowing you to load and unload custom applications and to add customizations to the Startup Suite, which will then be loaded each time you start AutoCAD Architecture. The Run Script command button allows you to execute script file (SCRIPT command). The Visual Basic Editor command button displays the Visual Basic Editor, allowing you to edit VBA projects (VBAIDE). The Visual LISP Editor command button runs the VLISP command, calling up the Visual LISP Integrated Development Environment window, where you can create and edit LISP routines. The Run VBA Macro allows you to run, edit or delete a VBA macro (VBARUN). Click on the Applications title bar to expand the panel and reveal two additional command buttons: Load Project, to load a global VBA project into the current work session (VBALOAD) and VBA Manager, to manage your VBA projects in a dialog box (VBAMAN). Note that in the 2010 release, Microsoft® Visual Basic® for Applications software is not installed when AutoCAD Architecture is installed. You can download the files needed to use VBA in AutoCAD at http://www.autodesk.com/vba-download.