As noted in the Readme, you may need your original installation disk[s] or network image when installing the Service Pack, so be sure to have that handy before you start.
Posted by David Koch at 9/28/2006 12:08:00 PM No comments:

In anticipation of my firm's migration from ADT 2004 to 2007, I was curious as to how we might be best able to take advantage of the addition of an automatic "Name" property for Spaces and the introduction of List Definitions, an expansion of Name Definitions for Areas in previous releases, which now can be applied to Spaces, Zones and/or Manual Properties and can be used to create a predefined list of Names for Spaces.

We currently use a custom room tag based on the out-of-the-box scale-dependent tag, with a second manual property and attribute to support two-line room names, when needed. A formula property combines the contents of the two individual manual properties into one property for use in schedules. You can find a sample file with content similar to what we use in this thread in the Autodesk Architectural Desktop Content Discussion Group. An alternate formula, that can support two, three, or more room name properties/lines, is discussed in this previous article, which contains links to a sample file posted in the ADT Discussion Groups.

Since there is only one "Name" property for Spaces, that would not be compatible with our current methods. I recalled, however, that the Autodesk Knowledge Base for ADT offers another method for creating a two-line room tag that makes use of a single manual property for entering the name and uses MTEXT codes to achieve two or more lines of text. A companion formula property strips out the MTEXT codes for use in a schedule. I just tested this in ADT 2007, with the hope that the List Definition entries could be set up with the MTEXT codes, but it turns out that the backslash character used by the MTEXT codes is not valid.

It looks as though we will have to keep our current set up, possibly adding a List Definition to each of our Manual Properties for room names and remember to train everyone to ignore the Name property on the Design tab of the Properties palette, and keep using our current two Manual Properties on the Extended Data tab. 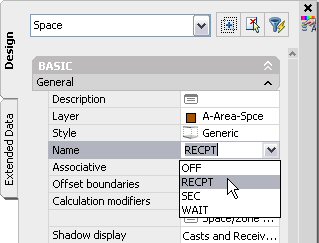 I came across an old article on dealing with NA as a potential value in a Formula property. The workaround I suggested, as illustrated in a sample file posted in a reply in the Autodesk Architectural Desktop Discussion Group, made use of the VBScript TypeName function to test whether the value of an automatic property was "Empty", which results in the dreaded NA being displayed in a property, and causes a formula that tries to perform mathematical operations on that value to fail.

That workaround remains valid, but today it occurred to me that the same approach that Scott Arvin used for the "Cost" examples in his Property Data Enhancements Brain Dump might also work for NA. In the "Cost" example, the ? returned when a property is not attached to a scheduled object will also cause a formula that tries to evaluate it to crash. The ? character that is displayed for Undefined properties is specified in the Property Data Format assigned to the property, as is the NA for Not Applicable properties. You can avoid the crash in either case by creating a Property Data Format that assigns an explicit string to the Undefined and/or Not Applicable properties. You do that by typing in opening and closing double quotes around the text you enter into the associated edit box, as shown for the Not Applicable value in the Standard-8-NA Property Data Format shown in the image below. 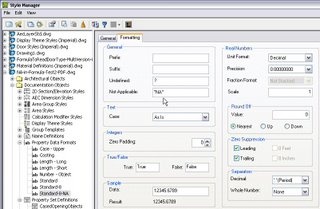 
A direct test for "NA" in [ThicknessUnformatted2] worked when the value was Not Available, and therefore "NA", but did not work when the value was a real number, so I changed the test to simply determine whether the type was a string [the TypeName function always returns a string, so a comparison to another string should not cause a failure]. This alternate approach does not require the ThicknessForFormula Formula property that the original one did, but does require a custom Property Data Format. I would call it a draw and suggest you use whichever method seems best to you.
Posted by David Koch at 9/03/2006 08:34:00 PM No comments: