ACA: Unexpected Thawing and Turning On of Layers

If you are using AutoCAD® Architecture 2015 and 2016, you place AEC Objects on layers other than the layer associated with the default Layer Key for that object type and you have occasion to turn off and/or freeze the layer associated with that default Layer Key, you may have found that simply selecting one of the objects on one of the other layers will result in the layer associated with the default Layer Key being turned on and thawed. This makes it difficult to work with just the items on the "other" layers. One situation where this would be desirable is on a renovation project, where you have the existing-to-remain, existing-to-be-demolished and new construction objects all in the same file, and you want to view and edit the demolition plan. To do so, you would turn off and/or freeze the new construction layers, and would not expect these to turn back on and thaw just because you select an item on the existing-to-remain or existing-to-be-demolished layers.

For example, you may have a file where the WALL layer key is associated with a layer named A-Wall-N, on which new construction Walls are placed. A layer named A-Wall-E is used for existing-to-remain Walls, and existing-to-be-demolished Walls are placed on a layer named A-Wall-D. As seen in the Screencast below, if the A-Wall-N layer is frozen and turned off, selecting a Wall on the A-Wall-D layer will result in the A-Wall-N layer being turned on and thawed. A REGEN is needed to see this immediately, since the layer had been frozen, but you can also check the Layer Properties Manager to see that the layer has, in fact, been turned on and thawed.

The 2014 release did not exhibit this behavior, as shown in the second half of the Screencast. Note also that if you select multiple object types at one time, only the layer associated with the default Layer Key of the first object type selected will be turned on/thawed.
Posted by David Koch at 11/21/2015 10:33:00 PM 2 comments:

If you are running AutoCAD® Architecture 2016 or AutoCAD® MEP 2016, and get this error message after working in the program for a few minutes

then you have a damaged WHITELIST.XML file, which is used in connection with the Desktop Analytics and Customer Involvement Program features.

This Autodesk Knowledge Network [AKN] article describes the issue and provides a procedure to fix the problem. In brief, with the program closed, you delete the damaged WHITELIST.XML file, reboot your computer, and then restart AutoCAD Architecture or AutoCAD MEP. Turn Desktop Analytics and the Customer Involvement Program features back on, if you turned them off, by selecting the right side (down arrow icon) of the Help split button, and choosing the Desktop Analytics and Customer Involvement Program items (one at a time). After several minutes, the WHITELIST.XML file should be downloaded from the Autodesk website (if you have an active internet connection). This file should not be damaged, and you should not experience the Exception in mc3.dll / mc3d.dll ARX Command error message. 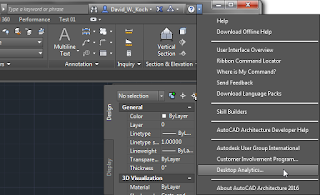 An alternative solution to stop the crashing is to use those menu items to turn off both Desktop Analytics and the Customer Involvement Program. The AKN article describes how to do so via editing the registry if you are unable to open the program and get to the Help Menu.