Like other text parameters in Revit, as you add Rooms to your project and provide values to the Name parameter, a list of used values is generated and made available for selecting the Name of a newly added Room. This can speed the naming of Rooms, when you have multiple Rooms with the same Name, and also makes it easier to be consistent in how you name them.

So today, I was the only design technology helpdesk staffer, and a question came in regarding the fact that in the project on which this person was working, there was a long list of room names from which to choose, that were NOT Rooms in that project. The problem was there were so many of these "mystery" names that it was slowing down the process of finding the desired name on the list, and the person wanted to be able to delete the ones that did not apply. I opened the project file and set up Room Schedules for each phase in the project, hoping to find that there were unplaced Rooms in one or more of the Phases that were generating these names. This turned out to not be the case.

Perplexed, I created a new project from our template, and found that those same names were on the list there, as well. I searched the help and the internet, trying to figure out what the source of these names was, to no avail. Then it occurred to me that there could be a Color Scheme in the project that was defining these names. I opened the Edit Color Scheme dialog (on the ribbon: Architecture > Room & Area panel flyout > Color Schemes), set the Category to Rooms and found a number of Color Schemes in our template file. Most were based on the Department parameter, but one was based on the Name parameter, and it was the source of the "mystery" names on the Room Name list. 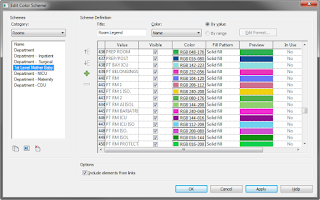 One of the users at my firm was trying to link an AutoCAD file into Revit 2016, to get some formatted text notes into his project. The formatting of the text changed from what shows in AutoCAD when linked into Revit. It turned out he was using the Columns feature of MText to get his notes to wrap into a second column, as the total "height" of the notes was greater than the height of the sheet. Revit ignored the columns formatting and displayed the text as one continuous column, with the width set to match the total width of both columns in AutoCAD.

The solution was to reformat the MText in AutoCAD, removing the columns formatting, setting the overall width to that of one column, and breaking the MText into two separate pieces, one for each of the former columns. Any future edits to the AutoCAD file will have to deal with the separation of the MText into two pieces, but the text does appear as desired when linked into Revit.