Prior to the 2007 release of what was then called Autodesk® Architectural Desktop, all properties in a Property Set Definition attached to a selected item were displayed on the Extended Data tab of the Properties Palette, and they were displayed in alphabetical order. In response to user requests, the 2007 release added two columns to the Definition tab for Property Set Definitions, one titled Visible with a toggle that allowed you to choose whether or not each property would be displayed on the Extended Data tab, and one titled Order that allowed you to specify the the order in which the properties were shown.

In the image above, the Visible and Order columns can be seen at the far right; the properties in the Style Manager are sorted by the Order column because I clicked on that column header before making the screen capture. The ObjectID automatic property will not be seen on the Extended Data tab of the Properties palette because the toggle in the Visible column has been cleared.

These additions allowed those setting up the standards for an office to make interacting with property data easier for the end users by ordering the properties logically and hiding any properties whose values the end user cannot change and which the end user has no workflow reason to reference. But it does pose one small problem for the person managing the office's standards - it can be hard to trouble shoot an issue if you cannot see all of the values of the properties that go into the ones that do show up on a Schedule Table or that are shown on the Properties palette.

The value of the AECPSDVISIBILITY system variable can be set at the Command: line or in the Options dialog, on the AEC Objects Settings tab, in the AEC Property Set Definitions area at the lower left, by using the Property Override drop down. 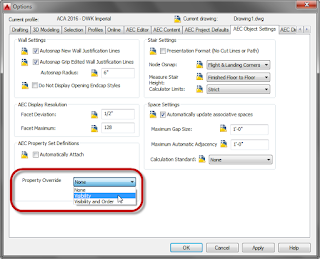 The AECPSDVISIBILITY setting applies to all drawings open within a given drawing session, as well as any drawings opened later in that same session, until/unless manually changed. It is not, however stored in any of the drawings, and when you close the program and then reopen it, the value will be back at the initial default value of 0. One other item to note: when AECPSDVISIBILITY is set to 1 or 2, the Visible column on the Definition tab will be grayed out and unavailable for editing.

Setting the value of AECPSDVISIBILITY back to 0 will allow you to edit the Visible column settings again.
Posted by David Koch at 5/26/2015 07:35:00 AM