Dynamo provides a way to modularize code, both to make it easy to reuse in future projects and to make it easier to follow the flow in the main routine. Creating a custom node is as easy as selecting the group of nodes that perform a particular function in a Dynamo file and choosing Edit > Create Node From Selection from the pull-down menus or pressing CTRL+D. 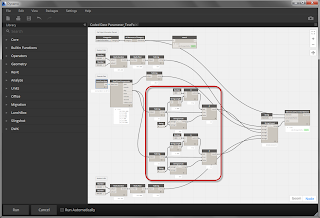 The image above shows the Coded Date Parameter graph with the custom nodes replaced with the underlying nodes. This works, but it occurred to me that I might want to reuse the conversion of an integer to a two-character, zero-padded string part in the future, By creating a custom node for that part of the graph, I can save the custom node (as a DYF file) to my Dynamo definitions folder, where it will be available in the left-sash Library. An added benefit is the simplification of the main graph.

This custom node expects to receive an integer input, and uses the ToString node (Core > Builtin Functions > ToString) to convert the integer to a string. This string is then sent to three different nodes: The net result is that if a single-digit integer is the input of the node, it will be converted to a string and have a single zero character added at the front of the string. Any other length string will be passed through "as is." Since the input to this custom node is an integer representing a month or a day, the input will only have one or two digits, and this node will provide the desired zero-padding to yield a two-character string in all cases. Any future reuse of this node would require the main graph to assure that the integer input would be in the range of 0 to 99 for a two-character result.

After getting this to work, it occurred to me that it would be more useful to have a custom node that could handle zero-padding to any specified number of characters. But since this node satisfied the needs of the immediate task, I chose to save creating such a custom node as a future task.
Posted by David Koch at 12/27/2014 11:00:00 PM