There is a bug in the 2018 release of AutoCAD® Architecture and AutoCAD® MEP that affects how the "ByLayer" property value of an AEC object in an external reference is being resolved. If a component is assigned to Layer 0 and then the Color, Linetype, Lineweight, Plot Style, etc. is set to ByLayer, the value assigned to the layer of the parent AEC object should be assigned. When the object is directly in the current file, that works. But if that file is externally referenced into another file, the property value of the layer of the external reference is assigned, rather than the property value of the layer of the parent AEC object. In the image below, the left side shows a Door that has been placed on a layer called A-Door-Demo. The visible components are assigned to Layer 0, with ByLayer Color and Linetype. Layer A-Door-Demo has Color set to 32 and Linetype set to HIDDEN2. On the right side, that file has been externally referenced into another file, and placed on a layer called A-Anno-Refr, which is set to Color 212 and Linetype Continuous. As you can see, the Door components have picked up the Color and Linetype from the layer on which the external reference is placed, not from the layer of the parent Door object. 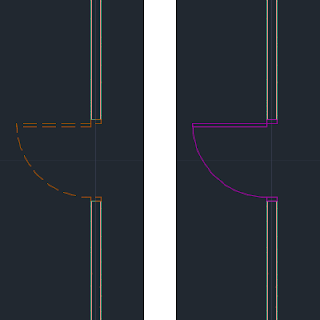 The suggested workaround, changing "ByLayer" to "ByBlock" works, but would be a major undertaking if you have many components assigned to Layer 0 with ByLayer attributes. We will hold off on deploying 2018 until this is fixed.

As noted in this Autodesk Knowledge Network article, Autodesk is aware of the problem and working on a fix. Keep an eye on that article; I suspect that when a fix is released, the article will be updated to reflect that.