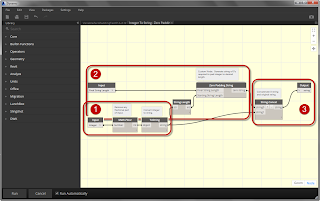 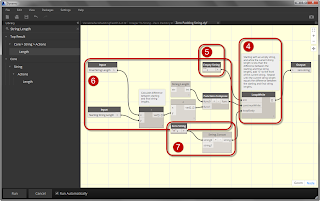 NOTE: I put "integer" in quotation marks when describing the node input above because while that is the intended input, both inputs will accept a double (precision real number), with a non-zero fractional value, as input. For the number to be converted, any fractional part is discarded prior to the conversion to a string. The way the Final String Length value is used, any fractional amount will be the same as specifying the next higher integer. If a given application could generate a value with a fractional amount as the input for the Final String Length and only the whole number value is desired, the Math.Floor node should be used to strip the fractional amount. This works for non-negative numbers; the function returns the first integer that is lower than the input value. For negative numbers, this will change the units number. So 1.9 becomes 1, but -1.1 becomes -2. I was not expecting to be using zero-padding on negative numbers; if you have an application that would require that, then you may want to modify the code to accommodate that. Note also that the sign ("-") counts as a character after a negative number is converted to a string. If you want the zero padding of a negative number to be calculated without including the "-" sign in the number of characters, the code would have to be modified to account for that.
Posted by David Koch at 1/06/2015 05:42:00 PM