Long-time users of Autodesk® AutoCAD® and Autodesk® AutoCAD® Architecture are likely familiar with the HIGHLIGHT system variable, which enables/disables highlighting of selected objects. Back before grips, enabling it was the only way to visually keep track of what objects were currently selected. The 2015 release adds a new effect to both selection highlighting and selection preview - the "glowing line" - along with the traditional dashed line (dashed and thickened for selection preview). Hardware acceleration has to be enabled in order for the glowing line effect to be displayed. The SELECTIONEFFECT System Variable allows you to choose between the two options (see below for details).


Depending upon your viewing preferences, machine capabilities and drawing size and complexity, you may find selection preview disruptive to your workflow. You do, however, have more control over this feature than just on or off. Selection preview can be globally turned on or off independently for two different conditions: when a command is active and when no command is active. This is controlled by the SELECTIONPREVIEW system variable (see below) or by using two of the toggles in the Options dialog, on the Selection tab, Preview area in the lower right corner, immediately under Selection preview. (The toggle settings reflect the current value of the SELECTIONPREVIEW system variable; checking or unchecking the toggles will modify the system variable accordingly.) 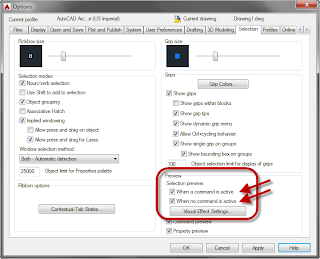 An additional level of control is provided by the PREVIEWFILTER system variable (see below for more details). This allows you to exclude certain types of objects from receiving the selection preview highlighting: objects on locked layers, external references, tables, groups, multiline text and hatches. In addition to assigning a value to the system variable directly, you can control this from the Options dialog, on the Selection tab, in the Preview area, by selecting the Visual Effect Settings button. This opens the Visual Effect Settings dialog; the Selection Preview Filter area on the right side contains toggles for excluding each of the previously listed object types (checked = no selection preview). 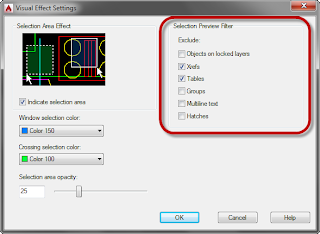 
Details on the system variables that affect highlighting and selection preview follow. The variable names are linked to the 2015 Online Help topic for that variable.

SELECTIONPREVIEW (saved in registry; bitcoded sum of the following values)
0 - Off
1 - On when no commands are active
2 - On when a command prompts for object selection 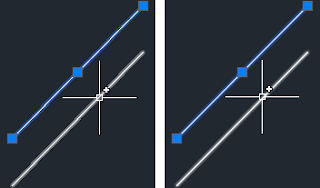 Lines with HIGHLIGHTSMOOTHING Set to 0 [Left] and 1 [Right] 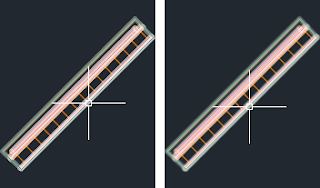