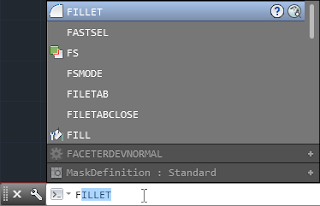 As you can see in the image above, my Command Line Suggestion list currently has FILLET as the top-ranked response after typing "F" at the Command: prompt. But it did not start out that way, and, to my annoyance, I found that the AutoComplete feature was frequently trumping my "F" command alias for FILLET. More often than not, it was executing the Express Tools FASTSEL command, no matter how quickly I hit the Enter key after typing the "F", because that command was at the top of the list. Initially, FILLET was not even visible on the list, without scrolling down. Yes, you can type additional characters to limit the choices, but the whole point of assigning a single-character command alias is to be able to execute a very-often-used command quickly.

I was made aware of this "issue" in a thread in the Autodesk® AutoCAD® Architecture Discussion Group, and discovered something of a workaround, if you both like the AutoComplete feature [I do] and yet want to be able to use command aliases. The workaround is not foolproof, and in cases where you frequently use multiple commands that start with the same letter, it may not be "permanent".

The workaround is simple, if tedious. Select the Customize tool on the Command Line (wrench icon) and then choose Input Search Options from the context menu that displays. 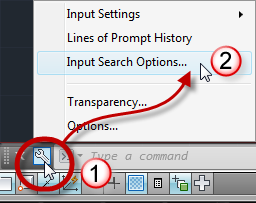 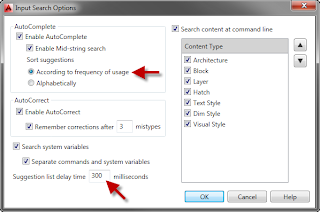 Also check the delay time at the bottom of the left side. The default value of 300 milliseconds was more than enough time for my single-character alias, you may want to increase this if you want to assure that the Command Line Suggestion List does not pop up if you have a longer alias, as there will not be any commands on the list with AutoComplete disabled. Finally, clear the checkmark next to Enable AutoComplete, to temporarily disable this feature. This will allow the command alias to be used without any interference from the AutoComplete feature. Select OK to accept the settings and dismiss the Input Search Options dialog.

Now for the tedious part: run the command you want at the top of the list repeatedly. I did not count how many times I needed to run the FILLET command to get it to the top of the list, but it was quite a few. In my case, it was probably made worse because I ran the FASTSEL command quite a few times while I was investigating this phenomenon. Once you get tired of running the command, open the Input Search Options dialog again and enable AutoComplete. Then type your alias and wait for the AutoComplete/Command Line Suggestion List to display, and see if your command is at the top. If it is, you should be able to use the command alias and get the desired command every time. If not, disable AutoComplete again and run the command repeatedly again.

Once your command is at the top, and if you increased the delay time, you may want to set it back to 300. You can do that in the Input Search Options dialog, or by changing the INPUTSEARCHDELAY system variable (which can be accessed by selecting the Customize tool on the Command Line, and then choosing Input Settings > Delay Time).

If you would rather just not deal with AutoComplete, you can disable this feature entirely by deselecting all of the options in the Input Search Options dialog (AutoComplete, AutoCorrect, Search system variables and Search content at command line).
Posted by David Koch at 8/23/2013 06:53:00 PM