ACA 2014: Tools from the DACH Extension

Four of the more popular tools that had been available to German, Austrian and Swiss subscribers have been made available to all AutoCAD® Architecture users. The Roombook ribbon tab from ACA 2013 has been renamed Vision Tools, and you will find these new tools there. 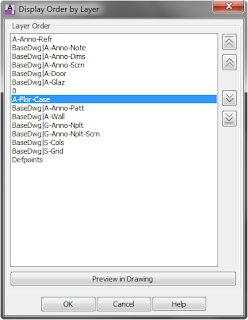 This tool allows you to rank the layers in a drawing and then have the display order set by the order in which the layers are ranked. This is a one-time deal. Future objects will appear on top of all previous objects; after setting the draw order by layer, that order is not dynamically applied to future objects. You can, of course, re-run the command, and the list is "remembered" with the drawing, so you do not need to recreate the list after saving, closing and then reopening the file. Note also that there is no way to "automatically clear" the draw order and return to what it was prior to applying this command. Two less-than-obvious ways this feature works involve external references. While you can re-order the layers of an external reference in the list and have it affect the display order, there are two limitations:
Escarpment

Use the Escarpment tool (AecEscarpment command) on the Graphics panel to create the linework often used to depict a sloping condition quickly and easily. You only need to pick the upper and lower sides and provide a distance between lines on the upper side. The generated linework is placed as a Block Reference, on the current layer; nested objects are on the current layer with ByBlock color, linetype, plotstyle (for drawings using named plot styles) and lineweight and ByLayer transparency and material.

To Layer 0
The To Layer 0 tool (AecMoveBlockToLayer0 command) on the Block Definition panel moves all nested objects within the Block Definition of a selected Block Reference to Layer 0. Unlike the Set Nested Objects to ByBlock option on the right-click menu when a block reference is selected (SetNestedObjectsByBlock command), this tool only changes the layer of the nested objects and leaves other attributes (color, linetype, plot style, and lineweight) alone. The SetNestedObjectsByBlock command also changes the color, linetype, plot style, and lineweight of the nested objects to ByBlock. The To Layer 0 tool also works on nested blocks, setting the objects within them to layer 0 as well; the SetNestedObjectsByBlock command does not affect objects within nested blocks.