Speaking of Paul Aubin, he is now offering live, on-line training sessions. If you are wondering how to get the most bang for what remains of your recession-reduced training budget, you may want to keep an eye on the classes he is offering. So far, these have all been Revit classes, but he has requested input on future topics for both Revit and AutoCAD Architecture. You can pay for one connection and, if you have a projector or a conference room with a large monitor, as many people as you can get in the room (respecting building code occupancy limitations, of course) can watch the session. The initial presentation of each session is live, using GoToMeeting software, and includes the potential for two-way VOIP communication (plus a Chat feature, if, like me, your computer does not have a microphone hooked up to it). There is an option to call in, if you prefer, as well. The software also allows Paul to post occasional polls (and even a quiz on the previous session). The sessions are recorded, and are posted a few days later for review or to allow later watching of the session should you not be able to attend the live event.

The current class is a five-session series on the Revit family editor. As a "late" registrant, I watched the recorded version of the first session, and attended the live presentation of the second session today. The image below shows a screen capture from today's presentation, in mid-demonstration in Revit, to give you a feel for the look of the presentation. (Click on the image to see a full-size version; use the Back button on your browser to return here.) 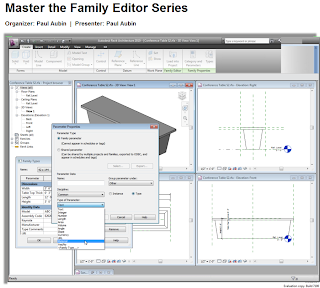 As a relative newbie with Revit (having just finished three days of "essentials" training last week), I found both to be quite informative, and look forward to the remaining three classes in this series. Paul provides a nicely illustrated PDF that includes tutorials covering the examples he shows during the class along with explanatory material. There is also a ZIP file containing a dataset with files related to the tutorials.

If the Revit family editor is something that you have always wanted to know more about, or if you have some experience with it but are interested in how it is done in the 2010 interface, then you may want to consider signing up for this class, even though two sessions have already been presented. You can watch the recorded version of the first two classes and then catch the live presentation of the following three classes, starting next Thursday (August 13, 2009). Having done a session each way, I can say that other than the polling and the opportunity to ask a question at the end of the live session, there is no substantive difference between the two. (I assume that the polls and parts where Paul asked for a show of hands were edited out of the recorded version.) The fifteen-registrant limit mentioned in Paul's blog article has been increased to 200, so there is plenty of room if you are interested.

Full Disclosure: I have known Paul through the Autodesk Discussion Groups, have met him and attended his classes at AU over the years and recently helped him update his Mastering AutoCAD Architecture book for the 2010 release. Paul provided me with a complementary registration for the Family Editor class.
Posted by David Koch at 8/06/2009 08:49:00 PM