Notice of the lifting of the NDA for the AutoCAD® Architecture 2010 Beta was finally received on Tuesday. The big change in 2010 is that the interface is going all Ribbon, all the time. The Visualization Workspace in 2009 made use of the Ribbon, but the others kept the previous pulldown menus and toolbars. In 2010, the entire interface has gone over to the Ribbon side. When selecting an AEC Object, a contextual Ribbon tab with commands related to the object will appear.

If you are also a user of Inventor, or have friends or colleagues who are, you can now export Inventor part files and assemblies to AutoCAD Architecture as Multi-View Blocks.

Walls have been enhanced by adding fillet and chamfer to the list of commands available when editing wall endcaps in place. The one major, non-Ribbon feature added in this release is the ability to edit Wall cleanup in place, on a component-by-component basis, as shown in the following example.

Two stud Walls, with similar components, but different stud widths, where one face of stud aligns, will still not clean up automatically if there is no perpendicular Wall at the place where the two Walls meet.

In previous releases, one workaround for this was to simulate cleanup by creating open ended Wall Endcaps and offsetting one of them so that the linework was continuous, but the Wall graphlines did not meet.

In AutoCAD Architecture 2010, the new cleanup edit-in-place feature can be used to get the cleanup you want, without the need to create offset Wall Endcaps, and then fuss with the location of the graphline endpoints (and hope no one else messes with the results). This new feature is similar to the Wall Endcap edit-in-place feature that was greatly improved in the 2009 release.

The dashed gray lines indicate that there is a cleanup override. These only show when the Graph Display Representation is active (when the Wall Justification Display is toggled on) and are on a non-plotting layer in the out-of-the-box display settings. There is also an additional cyan rectangular grip when the Graph Display Representation is active, which allows you to delete the cleanup override. NOTE: This grip will be coincidental with the end grip for the wall to which the overrides are attached, and therefore will not be selectable. Select the other wall, or select the dashed gray lines to choose the other wall and have access to the rectangular Remove Component Overrides grip. Do not use a crossing window on gray lines, as that will select both walls. 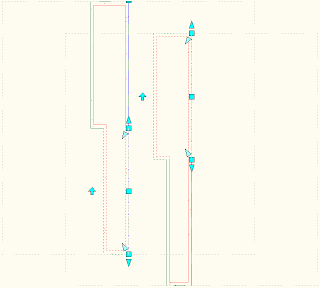 The screen captures above were made with an earlier version of the Beta. The Ribbon icon for the Add Selected command on the Wall ribbon, partial visible in the screen capture above, has been changed in the final Beta. Since this is not the focus of this article, I did not see the need to create a new screen capture. I walked through the above steps in the final Beta and did not notice any other variation from the images shown. As always, you can click on any reduced image to see the full-size version; use the Back function of your browser to return to the main article.
Posted by David Koch at 3/05/2009 11:55:00 PM