A denizen of the Autodesk Architectural Desktop Discussion Group posted a request for a method of dealing with this return value. The situation was one where a location property was being used with Areas, so that, where appropriate, a subordinate Area's area could be read into the main Area's properties and shown on a schedule. There would be main Areas, however, that would not have subordinate Areas; these would get the dreaded *Area not found* in the Location property and seing that in the schedule was not acceptable. When writing a Formula property to return "-" when there was no subordinate Area, the formula crashed when trying to compare the Location property value to *Area not found*. I have posted a sample file, done in ADT 2004, in a reply to that thread, that addresses the issued raised and also shows how you can create a Formula property from the Location that has a real number value with which calculations can be done. In the "not found" case, the real number is set to zero. Please note that the sample file was created to show possibilities, and the properties included are not optimized to a specific need. Some of the "formatted" properties would not be needed if the values were not being displayed in a Schedule Tag, as the "Unformmated" version could be placed as a column in a Schedule Table Style and a Property Data Format applied there. Some of the Formula properties might also be combined if there were no need for the intermediate results. Also note that the sample file was done in imperial units; the same concepts should apply to metric unit drawings as well. 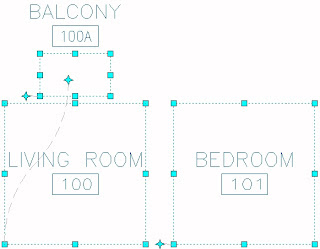 The image above shows the test objects in my sample file. There are three Area objects, two ten-foot square Areas, Living Room 100 and Bedroom 101, and a fifteen square foot Area for Balcony 101A. As you can see, Balcony 101A is subordinate to Living Room 100, as the Living Room Area's location grip is positioned over the Balcony Area. Neither the Balcony nor the Bedroom have a subordinate Area. For scheduling purposes, I created a Classification Definition that applies to Area objects, with two classifications - Main and Subordinate. The Living Room and Bedroom objects use an Area Style that has been classified as Main; the Balcony's Area Style is classified as Subordinate. This makes including only Main Areas in a Schedule Table easy, even if the Schedule Table is not in the same file as the Areas.

Writing an if condition to test the value of the Location property is fairly easy. Simply enclose the Location property and the test phrase in double quotation marks, and VBScript will do a text comparison. The problem is how to return the Location property value when an Area is found in a usable data format. You can not pass through the "raw" Location property value, as VBScript evaluates the entire formula, not just the logical path followed for each object, and *Area not found* will result in an error for Areas with no subordinate area. If the only need is a string which can be displayed in a Schedule Table, the solution is easy and the same as that for the if condition - enclose the property in double quotation marks. In the sample file, I have two location properties - SubordinateAreaFormatted and SubordinateAreaUnformatted. Both reference the BaseAreaUnformatted property of the subordinate Area; the formatted version uses the out-of-the-box Area Property Data Format; the unformatted version uses a custom Property Data Format called Standard-8, which is a copy of the Standard Property Data Format with the precision set to eight decimal places to maintain maximum precision, and, in this case, no zero suppression. The SubordinateAreaModified01 Formula property uses these two properties to test for "*Area not found*" and return "-" if found or the SubordinateAreaFormatted property as a string if an area is found. The formula is shown below:


This property can then be added to a Schedule Table, as shown below:

That is all well and fine if all you want to do is display the subordinate area in a Schedule Table. But what if you wanted to be able to have the Area as a numeric value, with which you could do some calculation? The same limitations encountered above will apply, and the solution used in the sample file is to accept that the Location property will have to be converted to a string to avoid an error in the formula, then to take that string and convert it into real number. In the sample file, this is handled by two separate Formula properties; you could easily combine them into one Formula property that does it all. The SubordinateAreaModified02 Formula property looks remarkably similar to the previous one, with the exception that the result when an Area is not found is "0.0" rather than "-" and the unformatted Location property is used. That is because we want to convert these values to real numbers, and non-numeric characters will cause an error.


The text values of the property would appear like the image below, if it were added to a Schedule Table. 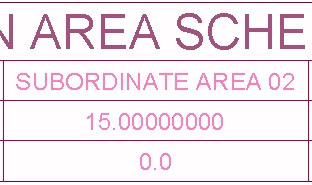 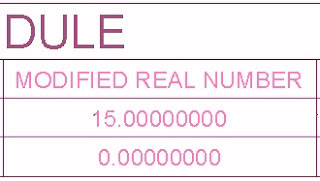 Now that we have a real number value, we can do math! [Trust me, that is a good thing.] Suppose that for rental purposes, the area of the balcony gets included at 75% of its actual area, along with the main area. The TotalAreaUnformatted Formula property is a simple, one-line calculation that does just that, and leaves the result unformatted should there be a need to do further mathematical operations on the result. 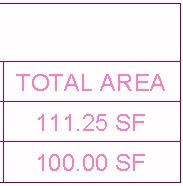 You can click on the image below to see a larger version of the entire table, with some explanatory text below each column, or download the sample file from the Discussion Group thread and look at it live.

Hi David
I worked the formula out in ADT 2006, but the same thing will not work for me in ACA 2008. Even the samplefile opened in ACA 2008 returns *Area not found*. Any ideas?
Regards Peter Tranberg

The original sample file, based on the original poster's question in the Discussion Group, made use of Area objects. Starting with the 2007 release, Area objects were discontinued, having been merged into a new and improved Space object, which has the features of both Area and Space objects (and more!).

In ACD-A 2008, you should be seeing "*Space not found*" in the schedule where you formerly would have had a hyphen ("-") or "0.0". That is because the initial formula properties are testing for "*Area not found*", which is no longer being returned by what are now 2D Space objects.