Autodesk Architectural Desktop provides a way to make certain the Layer Key Style in your drawing files reflects the latest revisions without having to manually import the revised Layer Key Style [or even to know that it has been updated]. The image and procedures shown here were created/developed for ADT 2004, but the same feature is available in later releases. 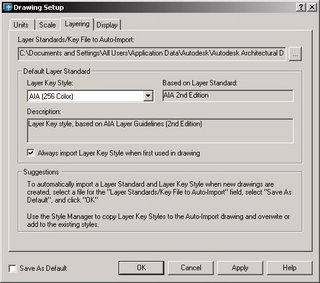 The path will be similar, with some minor variation in later releases. If you have a customized installation, particularly if some files were placed on the network for common access by all users, this file could be anywhere, but is likely located with your other content files.

If you have customized or plan to customize either the Layer Standard or the Layer Key Style[s], I would highly recommend starting with a copy of the AecLayerStd.dwg file, renamed to reflect that it has your firm's customizations, to make migration to new releases easier. Be certain to back up any customizations, whether to the AecLayerStd.dwg file or your own custom file.

Having identified the name and location of your central source file for Layer Standards and Layer Key Styles, you will want to make that your Auto-Import file by selecting the ellipsis [...] button to the right of the Layer Standards/Key File to Auto-Import area, navigating to your file and selecting it.

Next, set the Layer Key Style from your source file that you wish to be current, using the dropdown list in the Default Layer Standard area. Then note the toggle at the bottom of that area, labeled "Always import Layer Key Style when first used in drawing". Check that toggle if you wish to automatically update your drawing file with any future changes made to the Layer Key Style in the source file. If you want that to be the default condition for all drawings opened on that computer, for that users, also check the Save As Default toggle in the lower left corner. [You may want to check the settings on the other tabs to be certain they have the desired initial default values set before hitting OK, as the Save As Default toggle affects the entire dialog box.]

This feature is particularly valuable if you are just implementing ADT and make frequent changes to the Layer Key Style to get things "just right" for your office at the same time others are using ADT for production work.
Posted by David Koch at 10/03/2006 05:54:00 PM

hi this is Sree,did my bachelors from India,found your blog when looking out for an online tutorial ,thanks ,for your help.

Auto Import LKEYST The registry setting does not have affect, maybe only for creating drawings from scratch since I said save as default. So it has to be a per drawing settiing and if so, where it is stored and how can it be programatically toggled?