A user had a curious synchronization error today, on a model hosted on our BIM 360 hub. He emailed me the screen shot below. 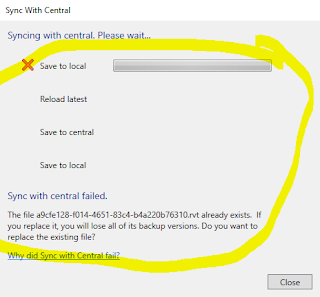 I did not know what to make of this - of course the [insert ridiculously long GUID here].rvt file already exists! That is the file he was synchronizing, and had been synchronizing successfully all day, up to that point. And why ask the apparently rhetorical question, "Do you want to replace the exiting file?", when there is no opportunity to respond to it? I was perfectly willing to trash the backup versions, as we have not had need to try to pull backups from someone's local cache on a BIM 360 project. (And thank goodness for that, as it is a royal pain just figuring out which [insert ridiculously long GUID here].rvt file is which.) A quick Google search did not generate any useful leads on how to proceed.

I walked over to the indivudual's workstation, repeated the error for myself and got lucky. After dismissing the failed Sync With Central dialog, Revit displayed the ever-popular "You have not saved your model recently" nag dialog. Before I could utter the snarky thought that immediately came to mind, I chose to click on Save. I got another dialog, with the same question about losing backup versions, but this one had Yes and No buttons. I said, yes, save it, and it did. Then I tried to synchronize again, half expecting that Revit would tell me the local was now incompatible with the central, but it synchronized just fine, resolving the crisis.
Posted by David Koch at 3/08/2022 05:44:00 PM