Had a support request today for the error dialog shown above, from someone working on a file in AutoCAD® Architecture 2016, who was trying to use a Wall Tool when the error occurred. That was all I was initially told, and "Unspecified error" is not terribly helpful. I asked the user to verify what AutoCAD profile was current and whether the problem was just with one file, or all files. In the course of responding, the user provided additional information. The problem was with just this one file, which had been working properly earlier. The reason the Wall Tool was being used was to fix Walls that were now "faulty." And when opening the file, this other dialog appears: 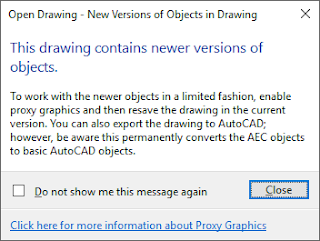 Bingo! The file had been opened and saved in AutoCAD Architecture 2018. Most likely, SAVEAS was used to set the file format to the 2013 file format, but that left the AEC objects in the file, including the Walls, in the 2018 file format. Those future objects disabled the AEC Commands, leaving the Wall Tool with no command to run. Add that to the list of reasons for getting an Unable to Execute The Tool error dialog.
Posted by David Koch at 1/22/2019 05:38:00 PM