A number of enhancements have been added to the 2D section feature (AecBldgSectionLineAdd and AecVerticalSection commands), to help streamline the process. Some of the enhancements also apply to sections generated with the callout tools.

In 2016, you place the section line and, after specifying the length (see below), you are immediately prompted for an insertion point for the section result.

Specify the insertion point and the section will be generated. Or, if you want to call up the Generate Section/Elevation dialog to specify a 2D Section/Elevation Style and/or a Display Set, use the Dialog command option. The reason why you are able to do everything in one step, skipping the dialog if desired, is because now a selection set of objects to include in the section is automatically generated based on the objects that lie within the section volume. This replicates the way that sections generated using the Callout commands have always worked.

Specifying the length of the section (the perpendicular distance from the section line to be included in the section), has been improved. Instead of typing in a distance at the Command: line, you can now indicate a point on screen, aided by rubberband lines from the section line (similar to the Callout tools). If dynamic input of dimensions is enabled, you can also type an exact amount for the dimension. (The dynamic input feature has been added to the Callout commands, also.) 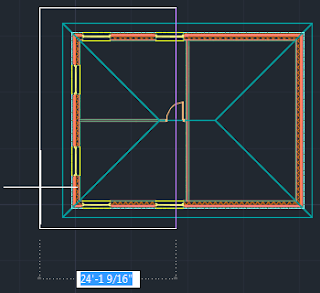 You can still choose to omit objects from the selection set, even though all objects within the section volume are automatically selected, by using the Generate Section/Elevation dialog, either on initial creation or when regenerating a section result (Aec2dSectionResultUpdate command). Previous releases had two tools in the Selection Set area - Select Additional Objects and Reselect Objects. These have been replaced in 2016 with a single tool, Select Objects. 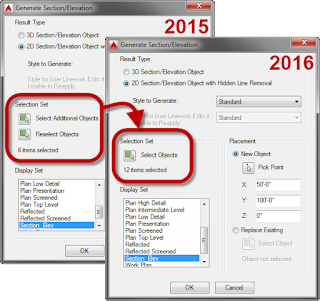 When you choose this tool, the dialog will be temporarily dismissed, and all of the objects in the current selection set will be highlighted. As indicated by the command prompt, you can select or deselect objects to modify the selection set used for the section result. 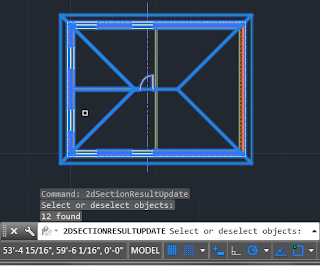 One final enhancement has been added to the flyout on the Section & Elevation panel. By selecting the Refresh Current Drawing tool, you can refresh all of the 2D Sections and Elevations in the current drawing. (Aec2dSectionResultRefresh command). 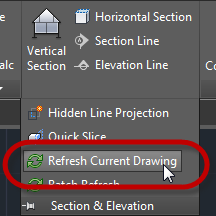