Transparency
Transparency, added to AutoCAD® (and AutoCAD® Architecture) in the 2011 release, is now fully integrated into AEC objects and the AutoCAD Architecture Display System. Previously, Transparency could be applied to the main object only, by using the tools on the Transparency panel on the Home ribbon tab. Entity Transparency is now an editable property for parent AEC objects, on the Design tab of the Properties palette, in the Basic category, General subcategory. 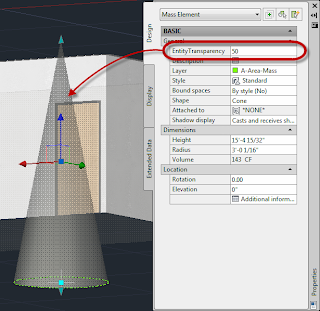 Valid values remain integers in the range of 0 (fully opaque) to 90 (most transparent) or "ByLayer" (use the Transparency set on the layer) or "ByBlock" (use the Transparency set on the parent object, useful only for nested objects, object components or Material Definitions). This same value can be edited in the Object Display dialog, on the General Properties tab, where you can type an integer value directly, or choose a value from a drop-down list. 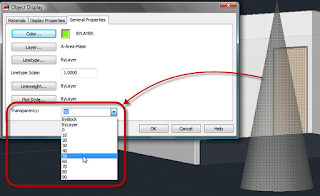 The easiest way to access the OBJECTDISPLAY command is by selecting an object, right clicking and choosing Edit Object Display from the context menu. Transparency is now also fully integrated into the Display System, allowing you to set a Transparency value for AEC Object components as well as in Material Definitions, Display Theme Styles and Layer Key Styles. As noted for main objects above, "ByBlock" and "ByLayer" are choices for components, Material Definitions and Display Theme Styles, so you do not need to hard-code Transparency values unless you want to do so. The Transparency values can be edited in the usual ways, in the Style Manager, when editing a Style or Definition or on the Display tab of the Properties palette, and can be applied at the drawing default, style-override or object-override levels. 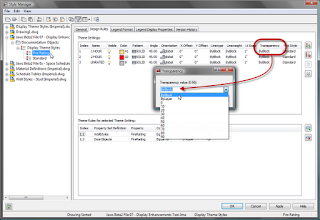 Transparency as a Display Property in Style Manager - Display Theme 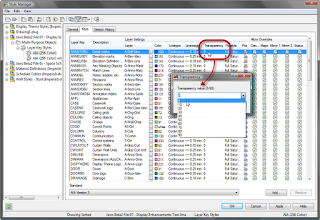 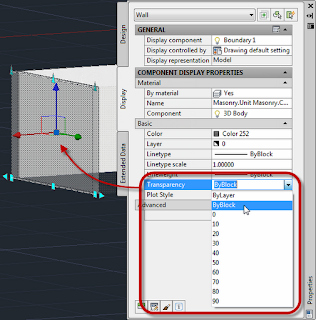 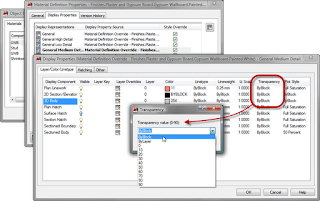 Transparency as a Display Property of a Material Definition
Keep in mind that Transparency works like any other object property: the value applied to a nested object will take precedence over that of the parent obejct. In 2011 and 2012, the only option was to apply Transparency to the parent object (for example, a Wall). Setting an explicit Transparency value to a Wall object would make the Wall display with the Transparency set. Doing the same in ACA 2013 will only make the Wall transparent at that value if the display of all of the Wall's components is set to be "ByBlock" (or just happens to be hard coded to that same value). For components whose display is controlled by an assigned Material Definition, then the Transparency of the active component of the Material Definition would need to be set to "ByBlock". When opening files created in previous versions, it appears as though the component values default to ByBlock, which would preserve the previous behavior.