The last several releases of AutoCAD® Architecture/Autodesk® Architectural Desktop have not been accompanied by printed manuals, but you could, if you so desired, order one manual per license, which would be shipped to you at no charge.

For the 2009 release, there are still three choices, but the AutoCAD manual is not one of them. Instead, in addition to the usual Imperial/Metric tutorial options, the other choice is to get a copy of the ACA Getting Started manual. At first, I was thrilled to see that an ACA manual was available, but something about the name seemed familiar. A quick check of the box in which the disks for AutoCAD Architecture 2009 were shipped revealed the source of that familiarity: the booklet included with the disks is called "Getting Started" and the part number on the back, 185A1-050000-PM01A matches that on the website ordering page. (Click on any image to see a larger version; use the Back button to return here.) 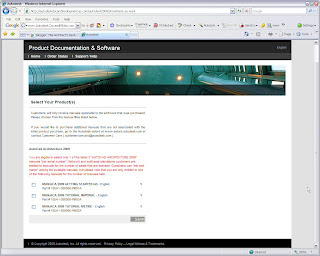 So unless you want additional copies of the sixty-nine page Getting Started booklet that comes with the disks, you may want to consider one of the other choices.

Given the major change to the user interface, the AutoCAD manual would have been useful. While I love being able to search the electronic Help, I am sufficiently old-school (and sufficiently old) to still value a printed manual, that I can use without having to sacrifice screen space with the application running (does everyone but me have dual screens now?) and can also peruse when I am away from the computer.