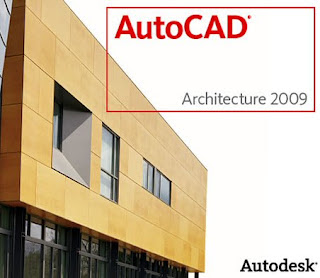 The NDA has been lifted (as if you were not already aware of it), and Betaprogram participants can talk about the features in the soon-to-be-released 2009 versions of Autodesk products. See Shaan Hurley's Between the Lines blog for several articles filled with links to all sorts of 2009-related articles.

There seemed to be more than the usual grumbling in the AutoCAD® Architecture Discussion Groups in the last few days regarding the lack of compelling new or improved content in AutoCAD Architecture 2009. Or maybe the nasty head cold/fever that persists in ignoring my requests for it to go away has simply made me more sensitive to it this year. The few things I have seen written about 2009 so far (I have not had time to visit all of Shaan's links) have been brief descriptions, which may not be doing the new things justice. I know I will not be able to convince those who start out certain that the new release is not worth the effort to install it, but perhaps the following will be able to convince those with a more open mind that there are some exciting new and improved features that will make the new version worth a more detailed look, in person. If I had more time, this would be better organized, but if I wait until I get it organized to post it, those on subscription will have the DVD in hand first. So please bear with the stream-of-consciousness approach.

User Interface
Let's get the most obvious thing out of the way first. Yes, the interface has been redone, again. This seems to annoy quite a few people, who think the effort should go into the program. I am not certain I can or want to argue with that philosophy, except to note that after I uninstalled the previous Beta in anticipation of installing the final one, I opened each of the other versions of AutoCAD Architecture/Autodesk® Architectural Desktop that I have installed, to make sure nothing got broken in the uninstall, and was reminded of just how painful the old 3.3 interface (so cool when it was new) now seems. And while the default look, colors and icons have changed a bit, it is not the radical change that the introduction of "palettes" in 2004 brought. 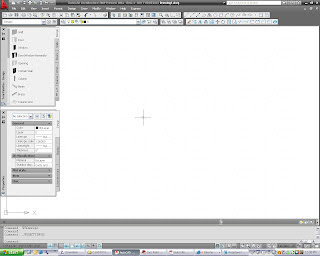 The Design Workspace (click on image for a larger view)

If you are going to use this "as AutoCAD," then the Ribbon thing may take some getting used to - but only the Visualization Workspace for AutoCAD Architecture is ribbonized. The other workspaces still have the old, familiar drop down menus, etc. Ribbonization of those workspaces was deferred to a future release, to avoid releasing a less-than-fully stable product prematurely. I do almost no visualization myself, so I have another year to make that transition. And you can always create your own workspaces, with just the features you want. One other nice feature in the new interface is the enhanced tool tips that are available when hovering over a button, tool, or object. For example, hovering over the Layer Manager button on the Layer Properties toolbar initially displays the tooltip shown in the image below.

Continuing to hover over the button expands the tooltip, with the following, more detailed information. 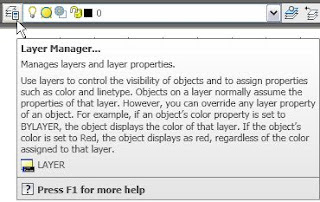 Not earth shattering, but it does give you the name of the command and a brief description. For experienced users, those tooltips will come in handy until you adjust to the new icons; for the newer user, they can provide easy access to help without having to navigate through the Help. And they are not restricted to commands - you can now quickly find the layer, style name and style description of AEC objects, simply by hovering over them. 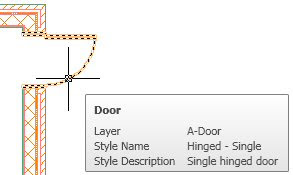 64-bit Support
Those of you with 64-bit machines will no longer have to jump through hoops to use a 32-bit version of ACD-A; 2009 will be available in both 32- and 64-bit versions.

Wall Cleanup Improvements - Say Goodbye to the Red Circle of Death
Wall defects have not been solved 100% (and there are some things, like coincindental walls, that are more a user defect than a program one). But 2009 will clean up many more conditions than earlier versions would have, including the often wished for cleanup between walls with baselines at different elevations. In the image below, the wall running from lower left to upper right was drawn with its baseline at Z = 0; the other wall's baseline is at Z = 2'-0". 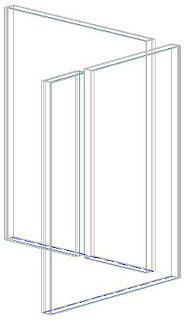 In previous versions, these walls would never have cleaned up, but switching to a top view... 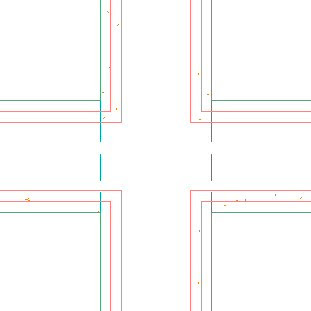 ...shows that these two walls do cleanup. So long as the baseline of one of the walls falls within the height of the other (and the projection of the graphlines onto a horizontal plane cross or touch - OR - the cleanup radius of one crosses the baseline of the other), cleanup will occur. Notice the dashed lines connecting the outer face of the vertical wall, which happens to be the lower wall, at Z = 0. This is the Below Cut Plane component, which is turned on in the out-of-the-box Plan Display Representation for Walls. I tweaked the settings, adding a linetype to make it easier for me to identify the linework in my description - you would see a continuous line here, as an indication that that wall runs through below the other wall. If you do not want that line, you would need to turn off the display of the Below Cut Plane component.

When defects do occur, the infamous defect marker of old, often affectionately referred to as the "Red Circle of Death" has now been replaced with the kindler, gentler "Orange Triangle of Elucidation". While still providing a visual clue that things are not quite right, if you hover over the marker, a "solution tip" will appear, giving you some help in trying to resolve the issue. In the image below, I intentionally overlapped two walls of the same style to generate a defect marker. 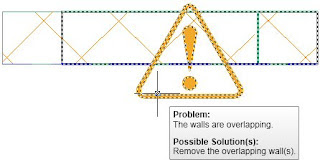 Had I been unaware of the reason why the defect occurred, reading the solution tip gives me both the cause and a possible solution. How many times in the past would you have loved to have that? If you draw a wall that is too short to display the assigned endcaps, or place a Door, Window or Door/Window Assembly without leaving enough space for the opening endcap, the solution tip will tell you that is the problem. I expect to see far fewer Discussion Group posts asking for help with that issue in the future. In addition to Walls, solution tips apply to the following objects: Stairs, Slabs, Structural Members, Roofs, and Mass Elements.

Wall Drafting Improvements
How many times have you started drawing a Wall, with the desired justification set, but picked the first point without thinking about whether the Wall would fall on the proper side, and picked what should have been the endpoint, not the starting point? Yes, you could grip edit it after the fact, but now you need only hit the CTRL key after selecting the first point to flip the wall, while maintaining the desired justification. In other words, you can now draw from end to start.

If that justification was not properly set, no more moving the mouse over to the Properties palette to change it. The SHIFT key will toggle between Left, Center, Right and Baseline justifications, as shown below.

If the standard justifications for walls will not get the wall placed where you would like, you can take advantage of the new on-screen options in the OFfset option of the WALLADD command. In addition to entering a distance (by typing or picking a point on-screen), you can now graphically select any of the following "lines": 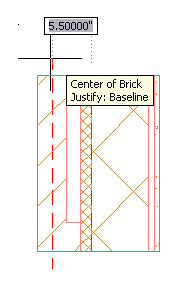 If all that proves too much new stuff to remember, the Communication Center has "Did You Know" balloons to remind you of new features when particular commands, such as the WALLADD command, are executed. These do close after a short period of time. Once you have absorbed the information, you can choose not to see a particular item again, using the link on the balloon. The down arrow expands the balloon to show a small graphic image. 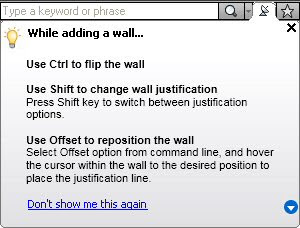 The final major improvement for Walls is in-place endcap editing. That is a whole article in itself, and there are additional new features for other objects to be discussed. My head cold/fever is starting to get the better of me, so I will conclude Part 1 here.

Error: The data is invalid
Choose to Retry to skip Cabinet
"C:\Document\Amit\Locals\Temp\ENUHelp.cab"

When I press Skip, then other error appears: -
Error: The data is invalid
Choose to Retry to skip Cabinet
"C:\Document\Amit\Locals\Temp\IntMetTempl.cab"

When I cancel Cabient installation process then, a dialog appears that RAC 2008 is successfully installed but when I run the application then it give error that - "AccuRender rendering feature is not available because the Accurender library could not be found on your computer. Please check the AccuRender resource path set in settings> Option dialog"

After it another error appears that the default template file specified in the "File Location" section of the> Setting>Options Dialog (C:\Document & Settings\All User\Application Data\Autodesk\RAC 2008\Metric Templates\DefaultUs-Canada.rte) does not exist. Other error appearas that: -
Some of the Revit Content that you chose to install was not successfuly installed, do You want to try and install the content again.
When I press Yes to install the require content then the same error occur that: -

Error: The data is invalid
Choose to Retry to skip Cabinet
"C:\Document\Amit\Locals\Temp\ENUHelp.cab"

When I press Skip, then other error appears: -
Error: The data is invalid
Choose to Retry to skip Cabinet
"C:\Document\Amit\Locals\Temp\IntMetTempl.cab"

RAC is installed porperly but except the Templates & Cabinet files. I checked in RAC 2008> Settings>Options>File Location>Default Template File then Press Browse for looking of defaultUS-Canada.ret, But this template is not exist.
Pls tell how to install cabients file without any error.

dont you think its time we get a rafter tool in the tool palette?

I need the solution for this prolblem when i try to install the RAC 2009...


Error: The data is invalid
Choose to Retry to skip Cabinet
"C:\Documents\ADMINISTRATION\Locals\Temp\TrainingFilesImperial.cab"


When I press Skip, then other error appears: -
Error: The data is invalid
Choose to Retry to skip Cabinet
"C:\Documents\ADMINISTRATION\Locals\Temp\ProteinMaterialLibrary.cab"

And also i didnt click the "configure button" so its skip to the final step which is have the finish button...

if i install the RAC2009 without click the configure button do make any problem in future?


RAC is installed porperly but except the Templates & Cabinet files.

Pls tell how to install cabients file without any error.