The 2004 release of Autodesk® Architectural Desktop included a number of additional "architectural" hatch patterns in the acad.pat and acadiso.pat files. There were a number of comments in the Discussion Groups regarding these additional hatches, including that it took the hatch select dialog a long time to load, the large number of added hatches made it difficult to find any one particular hatch and that there were a number of hatches that would never be used, so why waste time wading through them. Being architects, the list of hatches that "had to go" was, of course, different for each person.

The 2005 and later releases still provide those additional hatches (161 of them in 2005-2007; there were 236 in the final beta of 2008), but instead of including them in the main acad.pat/acadiso.pat file and leaving it to the individual user to edit that file, the additional hatches are provided as individual custom hatch pattern files [custom PAT files can only contain one pattern each]. This makes it as easy to control the patterns you have available as moving a file between folders in Windows® Explorer. But you do have to be aware of two things: 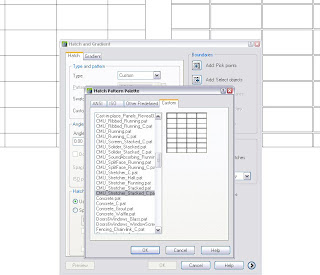 If you needed additional architectural hatches and were unaware that these were available, now you know they are available and how to access them. If you can not find a pattern that meets your needs in the ones that ship with ACA/ADT, you could always make your own custom hatches or search the Internet for additional hatches created by others. The Help has a very good section on how to create custom hatch patterns for those interested in learning.
Posted by David Koch at 3/31/2007 10:47:00 AM