Insert Tab
The Insert tab is the second static (always available) tab provided in the out-of-the-box ACA CUI. The image below and all screen captures in this article are based on the final beta version; it is possible that there could be some changes in the shipping version. 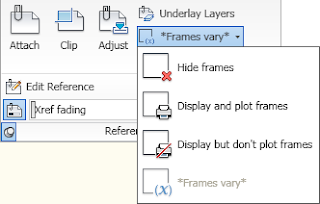 Frames can be hidden, displayed and plotted or displayed but not plotted. Setting a Frame setting will overwrite the current values of the IMAGEFRAME, DWFFRAME, PDFFRAME, DGNFRAME and XCLIPFRAME system variables. You can not directly choose the “Frames Vary” option; but changing any of the individual frame variables to something different will reset FRAME to 3 and activate the Frames Vary setting. The Underlays Snap command button allows you to control the ability to snap to geometry in underlays (DWF, DWFx, PDF or DGN). 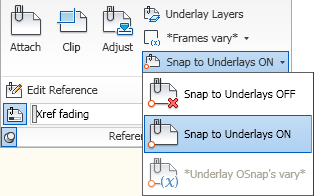 It toggles the value of the UOSNAP system variable, which, similar to the FRAME system variable, will overwrite the settings in the DWFOSNAP, PDFOSNAP and DGNOSNAP system variables, making them all either On or Off. You can not directly choose the “Underlay Osnap’s vary” option, but by setting one of the individual variables to a different value will reset UOSNAP to 2 and activate the vary option. The Edit Reference command button (first row in the flyout) runs the REFEDIT command. The Xref Fading command buttons (bottom row in the flyout) allow you to set the amount of fading, using either the slider or the edit box at the right, as well as toggle fading on and off, using the button at the left. (Note: You will not see any apparent change if you use the button at the left if the fading amount is set to 0, since there is no fading to toggle off.) Also note the arrow pointing down and to the right at the right side of the Reference panel title. Selecting that will open the External References palette.

The Define Attributes command button runs the Attdef command, allowing you to create attribute definitions for inclusion in a block definition. The Edit Attribute flyout offers two options for editing attribute values. Single runs the EAttEdit command, allowing you to edit the values, text options and properties of the attributes in a single instance of an attributed block. Multiple runs the -AttEdit command, which allows for the editing of attribute values individually or globally. 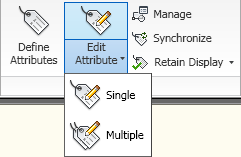 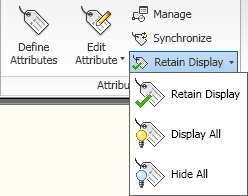 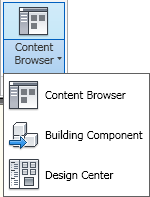 The Content Browser option opens, surprisingly enough, Content Browser. If you are keeping score at home, this is the second opportunity you have to do so (see the Tools flyout on the Build panel of the Home tab for the first one). Building component allows you to import “building components” that have been “published” from another application (*.adsk files) as a Multi-View Block, Block or, if you are running AutoCAD MEP, as a Multi-View Part (ImportBuildingComponent command). Design Center, as you can probably guess, opens DesignCenter (despite that extra space in the command button name).

Seek Panel
The Seek Panel offers the ability to use the Autodesk Seek feature (also available in DesignCenter), which allows you to search for product specifications and design files over the Internet.