The Shape property of a curved Mass Element will affect how it reacts to the FacetDev and FacetMax settings. Any of the standard shapes that involve a curve, Arch, Barrel Vault, Cone, Cylinder, Dome, Doric and Sphere, will be initially placed based on the settings of FacetDev and FacetMax, and will update when changes to the FacetDev value would result in a different number of segments. A change to the value of FacetMax will not result in a change to the faceting of existing Mass Elements, even if it would cause a lesser or greater number of segments. The effect of a change to FacetMax on existing objects will be seen only if the value of FacetDev is subsequently changed by an amount sufficient to result in a different number of facets. 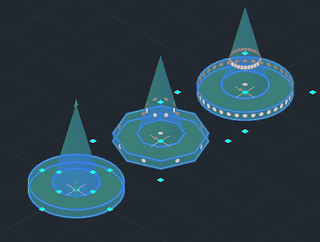 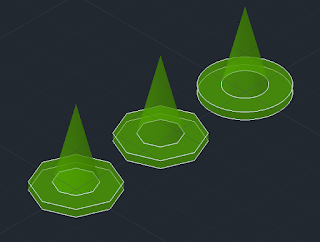 Dynamo: Forcing Exactly One-Half to Round Up

In the same Dynamo graph on which my previous post was based, I had a need to round a real number to the nearest whole number, and I wanted a decimal of exactly .5 to round up. The Math.Round node met all my rounding needs except for when the decimal value is exactly 0.5; that node "rounds to even," which means that both 1.5 and 2.5 will round to 2, since 2 is even. Statistically, when dealing with a large amount of data, always rounding exactly 0.5 to even (or rounding always to odd) makes sense, as always rounding up would tend to skew any mathematical analysis of the data to a higher value. In this case, the number was being used only as a label, and I decided that it should always round up.

I put together the following nodes to achieve the desired results. Numbers in the explanation below refer to the numbers in the image. As always, you can click on the image to see the full-size version.

An opportunity to use Dynamo to create a string with which to tag Curtain Walls came up in a thread in the AUGI Revit Architecture - Families Forum. The first task for the Dynamo graph is to select all of the Curtain Walls in the Autodesk® Revit® project file. The All Elements of Category node, in combination with the Categories node, is the usual method for selecting all objects of a particular category in a project file, but there is no Curtain Walls category; you have to choose Walls as the category, and you get all of the Walls, including Basic Walls, Curtain Walls and Stacked Walls.

Thanks to the Filtering / Selecting Curtain walls thread in the Dynamo Forum, in particular, the third post by thread initiator Aseem Deshpande, I was able to use a modified version of what was shown in that post to generate a list of just Curtain Walls from the list of all Walls. (The code posted by Aseem Deshpande sought to remove the Curtain Walls, leaving only "opaque" Walls.) I too had used the Element.Parameter node to examine the available parameters and noted that the Family parameter held the information I needed to determine if a Wall was a Curtain Wall. Unfortunately, I also found that the Element.GetParameterValueByName node was returning the Type name, rather than the value of the Family parameter. The nodes in the post provide a way to make use of the Family parameter value to determine if a particular Wall is a Curtain Wall.

In the image below, the list of all Walls generated by the nodes in the image above, is fed to both the Element.Parameters node and the List.FilterByBoolMask node.

The List.GetItemAtIndex node takes the list of parameters lists and the list of indexes of the Family parameter to create a list of the Family parameters. The String from Object node converts each item on that list from a parameter and its value to a string. A code block then tests each string to see if it is equal to "Family : Curtain Wall", which is the value that will be present for Curtain Walls; the output is a list of True or False values, True representing Curtain Walls and False representing Basic or Stacked Walls. This list of Booleans is used as the mask input to the List.FilterByBoolMask node, and is applied to the list of all Walls. That node generates two lists, the "in" list contains all the "Trues", or Curtain Walls, and the "out" list contains all the "Falses". The "in" list is what I needed for the balance of that graph, a list of all of the Curtain Walls in the Revit project.
Posted by David Koch at 12/25/2017 10:27:00 PM 1 comment:

My go-to for downloading Autodesk software from the Autodesk site, the Autodesk Virtual Agent, has been retired, and if you go to that URL, you will, for the next forty-two days or so, find something that looks like this (with a reduced countdown time): 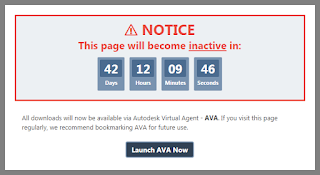 The good news is that the same functionality is still available, through AVA, the "new" Autodesk Virtual Agent. AVA is not really new; she has been around for some time now, answering general questions. What is new is now AVA can provide the download links that the old Virtual Agent provided. If you click on the "Launch AVA Now" link, you will be taken to AVA, pre-set for downloading. If you manage a number of users and find yourself frequently downloading installation files from the Autodesk site, bookmark that link. Or, you can go to the main link to AVA, and type in download as your first response to get Download A Product to show on the right side. 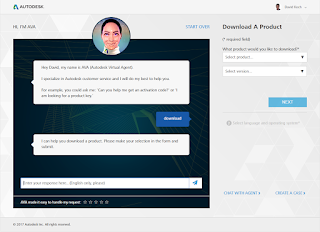