I had been noticing that the file dialogs in AutoCAD® Architecture 2010 were opening somewhat slowly over the last several months and became exceptionally slow this past Wednesday. I was not experiencing that issue in ACA 2014. I suspected that somewhere in my Options I had a bad file/folder reference or a folder that had a broken Windows shortcut in it. Things were so bad that after I completed the task at hand, I took the time to check out each reference, but did not find any problems. I was about to give up, when the problem planted itself right in front of me and amazingly enough I recognized it.

I make extensive use of the fact that AutoCAD allows you to save the current folder in the "shortcut bar" at the left side of most "Select File" dialogs, such as the one that appears when you issue the OPEN command. Unfortunately, I am not always diligent about removing older ones. I have been short on hard drive space on my computer for the last year or so, and have occasionally made DVDs of my personal project folders for older projects and then removed them from my hard drive. This turned any shortcuts to these project folders in AutoCAD into broken links, and waiting for these to time out was what had been causing the delay in opening the "Select File" dialogs. What made the performance on Wednesday exceptionally bad was that the server on which projects started in 2011 were stored went down today, and I had a number of shortcuts to folders on that server. Fortunately, AutoCAD/Windows gives you a clue that the link has become broken, by changing the folder icon from the manila, "3D" folder to a flat, white folder. Thanks to the server issue, I had so many of these white folders that I could not help but notice them. Once I removed all of them, the Select File dialog opening time returned to normal. 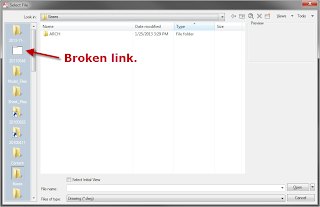