Your requests have been heard. Prior to the 2011 release, when placing Doors and Windows, you had a choice between Unconstrained and Offset/Center, where the latter would center the Door or Window on a Wall segment if you click near the midpoint of that Wall segment or would offset the opening a user-set distance from the end of the Wall segment when clicking near that end. The 2011 release introduced a number of additional placement options, but in order to offer these, the Offset/Center option was split into two separate choices, Offset and Center. (Read more about this change in the 2011 release in a four-part series of posts starting here.) Many missed the convenience of having Offset/Center as a single choice and complained about lost efficiency in placing Doors and Windows. The 2014 release brings back the combined Offset/Center option 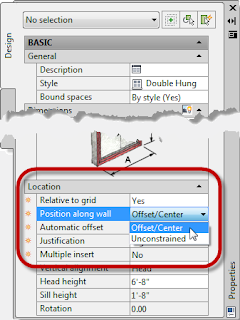 while keeping the options added in the 2011 release, as seen below on the Wall contextual ribbon tab, on the General panel. 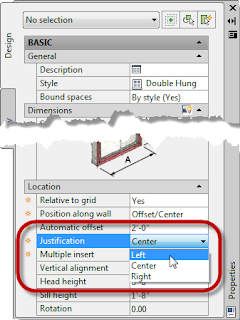 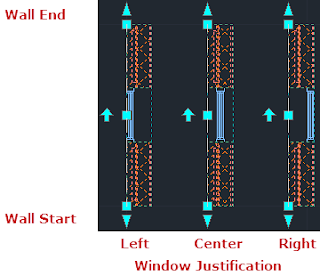 If neither of these features gets your Door or Window placed exactly where you want it, the Reposition Along Wall and Reposition Within Wall tools are still available on the Door or Window contextual ribbon tabs or right-click menus, as well as the grip editing options.
Posted by David Koch at 4/10/2013 07:46:00 AM

The Justification option seems to only appear for window and door objects, but not Door and Window assembly objects. Any idea how to make this option appear for these? Our firm just upgraded to AutoCAD Architecture 2016.

The Justification option is not available for Door/Window Assemblies.