A means to quickly get a visual comparison of geometry changes between two different versions of a drawing is now available whether or not you are working in the project management environment (Project Browser/Project Navigator), and without requiring a parallel folder structure. The comparison is only for visual changes; changing the Door Style of a Door will not be flagged if the on-screen graphics remain the same.

Outside of the drawing management environment, you can use the AECVCOMPARE command to compare an open drawing to any other file that you select using the standard file navigation dialog. (At the Command prompt, type VCOMPARE if you have AutoComplete turned on; if you include the "AEC" prefix, you will only be offered the related system variables noted below.)

If one of the drawings you are using is an earlier version and the other a later version, the command works best if you have the more recent version of the file open, and compare it to a previous version, as it will treat items in the open drawing that differ from those in the selected drawing as "new" and differing items in the selected drawing as "old".

The image below shows a sample "original" file, with Walls, Doors, Spaces, Schedule Tags and some AutoCAD®objects. 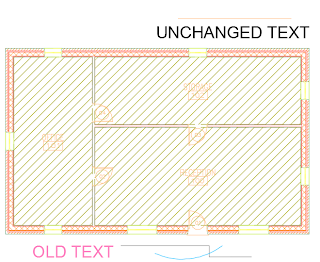 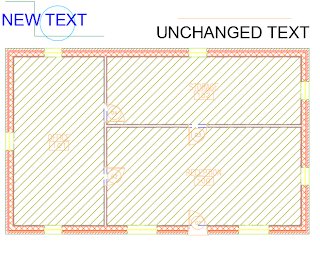 After running VCOMPARE with the revised version of the file as the current file, and selecting the original file as the comparison file, the screen display is changed to show you the changes, as shown in the following image. 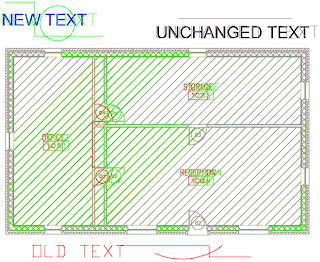 Five System Variables support the VCOMPARE command, and allow you to control the generated comparison graphics.
The values of the color variables are strings in the format rrr,ggg,bbb, where rrr, ggg and bbb are integers in the range of 0 to 255, inclusive, and represent the red, green and blue values of the desired color, respectively, in RGB format. The values of the "ignore" variables are either ON or OFF. When set to ON, the corresponding hatch or text is ignored in the comparison; when set to OFF, it is included in the comparison graphics. 1 for ON or 0 for OFF are also acceptable values.

While a comparison is active, you can use the options noted on the Command line to alter the comparison graphics. The "Old" option will show just the items in the file to compare that are either missing from or changed in the current file, along with unchanged objects in gray (turning off the green, new items). This can be helpful as the "New" graphics will cover the "Old" graphics when viewing both simultaneously. 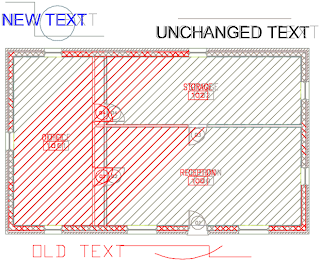 The "New" option will show just the items in the current file that are either newly added or changed from what they were in the file to compare, along with unchanged objects in gray (turning off the red, old items). 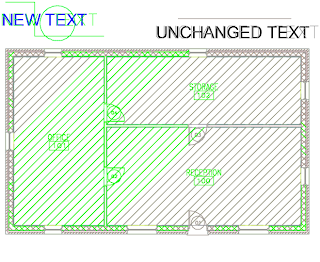 The "Unchanged" option turns off both the "Old" and "New" highlights, leaving just the grey highlighting on unchanged items, along with the balance of the current drawing shown in the "normal," pre-VPCOMPARE colors. 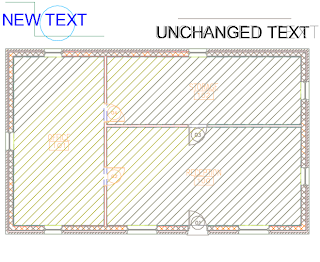 You can use the "All" option at any time to return to the original display showing all of the comparison colors. When you are done comparing the files, you can press the ENTER key to exit the command. Pressing ENTER twice immediately after exiting the command (before executing another command) will repeat the command with the same comparison file.