A little over a year ago, I contributed an article to the AU Quarterly Newsletter on creating equal lights in Door/Window Assemblies, Curtain Walls and Curtain Wall Units. Unfortunately, when the AU Online site was overhauled last December, the links to articles from previous newsletters were lost. For those who never read the article and those who have forgotten its contents (including me), here is the article. If you are interested, a drawing file that has the Door/Window Assemblies used to generate the images below, along with some other experiments done while writing the article, can be found in this post in the AutoCAD Architecture Content Discussion Group. 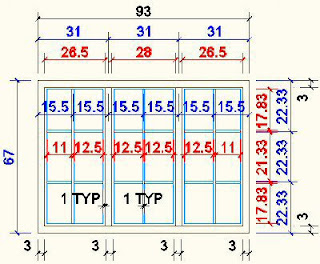 There are several ways to generate equal light openings in the parent Door/Window Assembly or Curtain Wall. 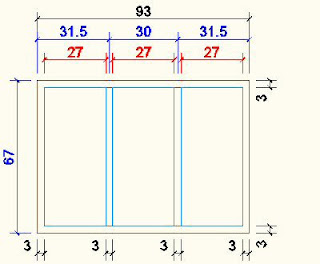 Figure 2
Equal Cell Door/Window Assembly with 1.5 Start and End Offset
For a Simple Panel, Door or Window Infill, using the Start/End Division Offset method is the way to go, as these elements will be sized to fit the light opening of the Cell in which they are placed. If you can achieve your desired Muntin pattern by using the Muntins in a Window Style, that may be the best way to get equal light openings in a style that works for any overall Frame dimension, using a single Infill style. 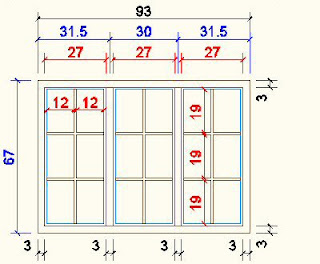 Figure 3
Equal Cell Door/Window Assembly with 1.5 Start and End Offset
Window Style Infill with 0 Width Frame and 1 Width Sash and Muntins
If you need the greater control over spacing that using a Curtain Wall Unit for Infill can provide, there is a small problem with using the Start/End Offset method – the applied offset makes the outer Cells wider, but does not move the grid lines from the outside edge of the Frame, so the same Curtain Wall Unit Style can not be used for all Cells. (The Mullion Offsets method may also have the same problem, because the light opening is likely not centered on the gridlines in all of the Cells.) Fortunately, two copies of that Curtain Wall Unit Style, one with a Division Start Offset and one with a Division End Offset equal to the Offsets applied to the parent object can be quickly created, assigned to an Infill and used in the Start Cell and End Cell respectively. This gives you the look you want, while maintaining the flexibility of being able to change the overall Door/Window Assembly dimensions. 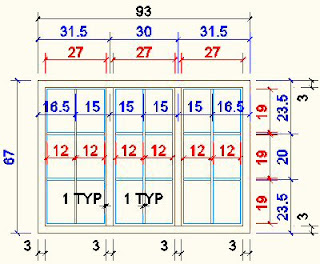 Figure 4
Equal Cell Door/Window Assembly with 1.5 Start and End Offset
Curtain Wall Unit Style Infill – Three Similar Styles:
1.5 Start Offset in Start Cell, No Offsets in Middle Cell, 1.5 End Offset in End Cell
(3.5 Offset Top and Bottom at Horizontal Division, All Three Styles)
Here is an example of a more complex muntin pattern. A series of nested grids, all using a fixed number of Cells, was used to create the pattern. Start and or End Offsets were applied as needed to get the equal light openings shown. This can be a little tricky to set up, since the nested grids for the Start and End Cells also need to have offsets applied, but once you have it set up, you can create a Door/Window Assembly with any overall length and height and maintain equal light openings. 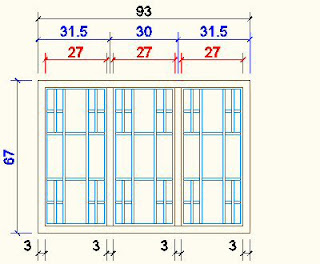