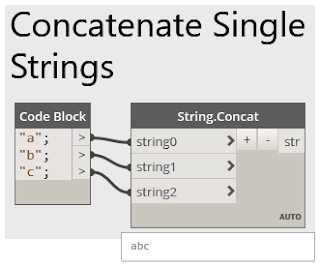 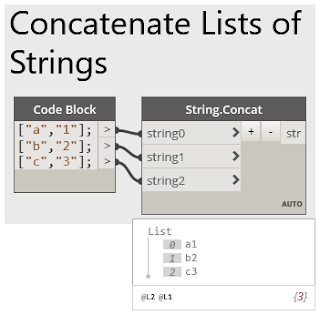 By using the List Create node, I combined my individual lists into one list of lists. The List.Transpose node then transforms that list of lists into another list of lists, in which each sublist has a list of the items from the same index in the original sublists. So each sublist has a list of the strings I want combined into one string, and this can be fed into the String.Concat node to get the desired concatenation. The output of the String.Concat node ends up having the list of concatenated strings nested in a list, so adding a List.Flatten node using the default flatten amount (totally flatten) results in a list of the concatenated strings, which was my desired result.
Posted by David Koch at 10/25/2019 12:46:00 PM