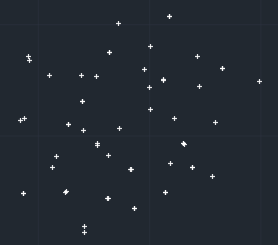 Many younger users may have never seen "BLIPS" and many older users have probably forgotten about them. The BLIPMODE command and System Variable have been undefined in AutoCAD® and its verticals since the 2012 release. Back in the day, if BLIPMODE was turned on, every pick would be memorialized on screen with a small, white "+" mark. ZOOMing, PANning or using the REDRAW (yes, that command did have a function once) or REGEN commands would clear these temporary markers from the screen. But if you worked for a while without needing to change your view, you could accumulate a lot of these (and would probably quickly turn BLIPMODE off).

Undefined is not the same as removed, however, and the command is still there, and the System Variable can be accessed via AutoLISP. The System Variable was (is) stored in the Windows Registry, not in the drawing file, so someone could change the setting in the registry, as well. If you find yourself working in a drawing and having blips show up with each left mouse click, even if you remember "BLIPMODE," you will find that neither the command nor the System Variable is "known" by recent versions.

What to do? At the command line, type in the command with a period at the front: .BLIPMODE. The period tells AutoCAD to use the original definition of the command, and suddenly AutoCAD recoginzes it.

Press the ENTER key, and then choose OFF from the command line options.

Or, if there is someone in your office who is overdue for a (mostly) harmless prank, wait for her/him to leave her/his workstation with AutoCAD open. Start a new drawing, type .BLIPMODE, press ENTER and choose ON. Close the new drawing without saving. Discretely slip away, and await your colleague's return, and eventual annoyance. You may want to pop in and offer to fix the issue, before things escalate to an HR-level event. [Use at your own risk.]
Posted by David Koch at 8/01/2019 10:46:00 PM