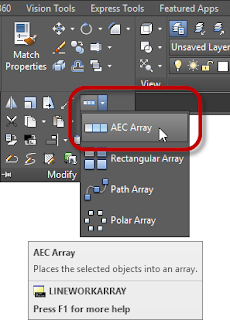 Or, with no command active, you can right click in the drawing window, and choose AEC Modify Tools > Array from the context menu. 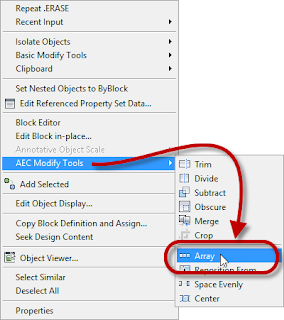 If you are intending to apply this command to a Door, Window or Opening object, you can also select the object and, on the contextual ribbon tab for that object type, on the Modify panel, choose the AEC Array tool.

While the AecLineworkArray command can be used to create a linear array of any AutoCAD® or AutoCAD® Architecture object, you will probably find the standard ARRAY command more appropriate for non-anchored objects, particularly if you want an associative array or if your array has columns and rows (and levels). But for anchored objects like Doors, Windows and Openings, which will remain anchored to the host Wall, you may find the non-associative linear array created by the AecLineworkArray command to be easier to use to achieve the desired results.

AecLineworkArray Command Notes: The following Screencast shows the command in action.
Posted by David Koch at 12/30/2016 02:36:00 AM