I came across this somewhat older article in the Autodesk® Knowledge Network recently: Creating a New Tool Palettes Set. Written for AutoCAD® Architecture 2011, I made a mental note to look into this when I had some time, because creating additional Tool Palettes File Locations is something that I do on occasion (more often than most users, no doubt). See the "Note" at the end if you are interested in why.

In the past, I had found that if I added a new folder path to the Tool Palettes File Locations node on the Files tab of the Options dialog and bumped it to the top of the list so that it would receive any newly added palettes, that the folder remained empty, and that added palettes went to the first editable location further down on the list. I did discover that if I copied the AcTpCatalog.atc file and all of the subfolders from a working palette location to my new folder, that new palettes would go into this location. Not wanting to duplicate palettes and images that were in the location from which I copied the AcTpCatalog.atc file and not wanting to have to delete them every time I set up a new tool palette set, I eventually deleted all of the palettes from a copied set (except for one, blank palette) and then set that aside as a "starter" location to be copied when making a new set. 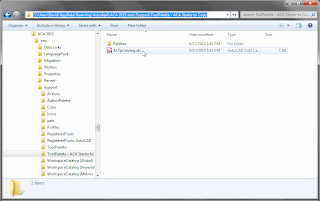 Years later, I discovered that by editing AcTpCatalog.atc with an XML editor, I could strip out the blank palette as well. I find Microsoft's free XML Notepad 2007 to be quite useful for tasks such as this. It is also great if you move content location and need to edit the paths stored in a lot of tools, as you can search for/replace one string with another.

So, I was quite interested in the procedure in this article, but, since I had been doing what the article said to do and had not had success in the past, I wondered what I was doing wrong. The clue to that is in the note in Step 7. Unfortunately, while what the note says is correct (if the location you add already has a tool palette set, a new one will not be created), it does not go far enough. The procedure and this note assume that you only have one path specified under the Tool Palettes File Locations node. If you have more than one path, and any one of the paths have a tool palette set, adding a new, empty folder and moving it to the top of the list will not generate a new tool palette set in that empty folder. You have to remove all folders that have a tool palette set in order to have ACA generate a new tool palette set in the new (top of list) folder. If you would prefer not to mess with the Tool Palettes File Locations paths set in your working Profile (removing them will remove the palettes from any Tool Palette Groups you may have set up), simply create a new Profile for the purpose of generating an empty tool palette set. In the new Profile, remove all paths except the one pointing to your new, empty folder. When you click OK to dismiss the Options dialog, a new tool palette set will be generated, with one, blank tool palette. 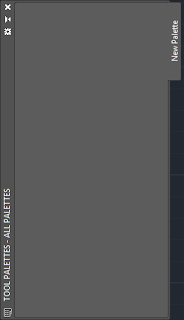 You can delete the new Profile afterwards, if you have no further use for it, and then add the new folder to your working Profile's Tool Palettes File Locations. That is much easier than copying an existing tool palette set folder and then deleting the palettes defined therein. And, having done this once, you can make a copy of that folder and reserve that as a seed folder that you can copy for future new palette sets.

Note:
I typically have a long list of "local" paths under the Tool Palettes File Locations node in my ACA profiles, as I have found it makes it much easier to bring these into a new release if they are not all jumbled together along with the out-of-the-box palettes in the WorkspaceCatalog (Imperial) [or Workspace Catalog (Metric) or Workspace Catalog (Global), if you typically use one of those] that is present on initial installation. [This is based on installing the United States English language content. You may have one or more differently named locations, and may not have one or more of these, depending upon your location and the content options you have installed.] 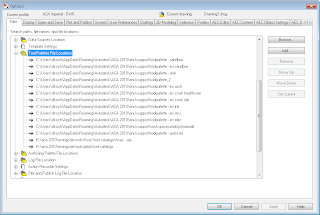 While I do have a custom, personal catalog into which I put "finished" palettes, and could transfer the palettes that way, I also have a lot of custom, on-the-fly palettes which I like to bring along, and I find it easier to keep these as editable local palettes, not linked to a catalog. And, as Design Technology Manager, I also need to be able to edit the tool catalog content for all of the disciplines at my firm. The end users typically access these palettes by directly including the path to the network-based Tool Catalog in their Tool Palettes File Locations. But in case some are i-Dropping refreshable palettes into their workspaces, I have a profile in which I do the same, so that I can edit the linked tool and copy it back and have it replace the previous tool. This maintains the order of the tools on the palette better than deleting the old tool and replacing it with a new one. I also like to keep each discipline's palettes in a separate Tool Palettes File Location, so that I can modify my profile to show just that location when doing the edits, to avoid confusion over i-Dropped and directly included versions of the same palette.

One last thought: The image above shows my Tool Palettes File Locations in ACA 2010. The folders that start with "toolpalette - " (actual folder name starts with "ToolPalette - ", but ACA does not keep the capital letters captialized) are custom locations I have added for various groups of tools. For reasons lost to the mists of time, I started the names of my locations that way, rather than with "WorkspaceCatalog". (Perhaps ADT 2004 did not use "WorkspaceCatalog" for the default folder names, or perhaps when working with the new-to-2004 feature back then, I confused that with the Tool Catalogs that also hold the out-of-the-box tool catalogs?) There is an out-of-the-box folder in the Support folder under your user name that is named "ToolPalette". This holds the out-of-the-box vanilla AutoCAD palettes and is not included as a path under Tool Palettes File Locations in the ACA Profiles (but is used in the "AutoCAD" profile, if you chose to create that when you installed the program).
Posted by David Koch at 9/13/2014 08:03:00 PM

Dave
I am trying to create separate tool palettes. for Casework,
Plumbing, Architectural and Structural. We have a large amount of block and folders for each category making it impossible to have just one pallet set. how do we switch from one pallet set to another. We are sharing this palette set.
Thanks
Jim M

Sorry for the slow reply. It has been a busy month. I am trying to understand your setup and workflow, in order to provide a meaningful response. Are you using AutoCAD Architecture, or just vanilla AutoCAD? Are you supporting the work of multiple disciplines here, or are all of these tools for use by one discipline (architectural?).

I also want to make sure we are talking about the same thing when we say "tool palette set". I am talking about a folder location where a group of palettes are stored. This can be on your local hard drive, under your Users folder, or it could be an ACA Tool Catalog location on the network, provided that the Tool Catalog has tool palettes defined within it.

Reply back with more information, if the above is not enough to answer your question, and I will try to keep a closer eye on the comments.

Dave,
Sorry also for the late reply. I believe we are talking about the hing.
I have 2 complete folders in our company drive. One Toolpalette-plumbing
and toolpalette-casework. Both are complete pallet sets with xpg , xtp
and image files. At this time I have both loaded onto one palette.
I would like to load them separately. I have created 2 menus one for
each using the CUI but I don’t know how to proceed from there.
I modified your macro with my path on each and tried to cut and paste
them on the macro on the menu box but when I pick the menu
Acad says it can’t find the toolpalette. I’m doing something wrong but
I know I am missing something.

The other way would be to have one AutoCAD Profile that includes both palettes folders under the Tool Palettes File Locations node on the Files tab of the Options dialog. The All Palettes Tool Palette Group (the default, and always available) will show all of them. If you right click on the Tool palette title spine and choose Customize Palettes from the context menu, you can create two Tool Palette Groups in the right list box, one for Plumbing and one for Casework. Then drag the palettes from the left list box (one-by-one, you cannot do multiple palettes at once) and drop them under the appropriate group. You can put the same palette in more than one group, in case you have a few palettes that have common items that should be seen in both groups. The order of the palettes in the right box (Palette Groups) is the order that the palettes will appear. Once the groups are created, the use can right click on the Tool palette title spine and choose the desired group from the list at the bottom of the context menu. You can also create two AutoCAD Workspaces, one each for Plumbing and Casework, and have the associated Tool Palette Group set current when changing Workspaces.